NETGEAR, Inc., a global networking company that delivers innovative products to consumers, businesses and service providers, is expanding its market-leading family of next-generation 802.11ac wireless products with the R6250 Smart WiFi Router. The industry's newest router to support the upcoming 802.11ac wireless standard, the R6250 is designed for customers who want the best possible 802.11ac WiFi performance but don't feel the need to have the fastest 802.11n WiFi performance in the 2.4 Ghz band.

The router includes Gigabit Ethernet ports and a USB 3.0 port so that you can make the most of the outstanding performance it delivers with 802.11ac WiFi. The NETGEAR R6250 is ideal for HD streaming to multiple devices, including the latest smartphones with 802.11ac, such as the Samsung Galaxy S4 and the HTC One. 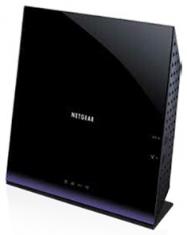 With a powerful dual-core 800 MHz engine to enable combined WiFi connections at Gigabit speeds up to 1600 Mbps (300 Mbps @ 2.4 Ghz 802.11n + 1300 Mbps @ 5 Ghz 802.11ac), the R6250 Smart WiFi Router offers optimal wireless coverage for large homes. It also has a new SuperSpeed USB 3.0 port, capable of transferring data from your hard drive up to 10 times faster than a USB 2.0 interface. These features make the R6250 ideal for enabling your increasingly connected digital lifestyle. The R6250 is particularly useful as the network hub for families with eight or more WiFi devices, and works especially well with dual-band WiFi devices such as the Apple iPad and iPhone 5.

He added, "802.11ac is the wireless standard you need for your network to cope with the growing demands you're placing on it for smoother HD video streaming and low-latency online gaming. The R6250, our newest addition to the 802.11ac WiFi router lineup, will help your network achieve the high performance you expect to support your increasingly digital lifestyle and premium WiFi devices - now, and for years to come."

The upcoming 802.11ac wireless standard (www.netgear.com/80211ac) is the world's fastest WiFi, providing Gigabit WiFi speeds so you can download web content faster and synchronize large video or music files more quickly. The increased speed of 802.11ac technology is ideal for mobile devices such as smartphones and tablets by providing three times the performance for a similar amount of battery consumption of devices using the current 802.11n WiFi standard. As a result, many companies, such as Samsung and HTC, are now releasing smartphones with 802.11ac WiFi, with additional 802.11ac-enabled smartphones, tablets and TVs from other leading manufacturers anticipated to debut in the coming year.

All devices in the next-generation 802.11ac product line, including the new R6250, are backward compatible with 802.11a/b/g/n to provide optimal interoperability with legacy WiFi devices and for maintaining maximum performance on Wireless-N networks.

Here are some of the additional advanced features of the NETGEAR R6250 Smart WiFi Router that you will enjoy: