In Overclocking World, You Will Be The Legend 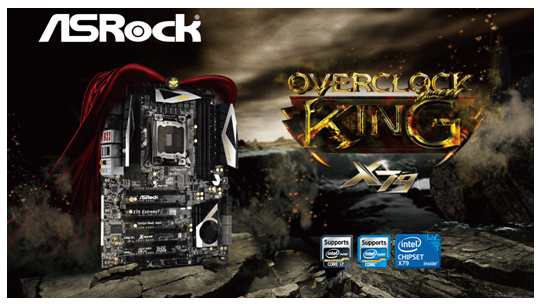 "The motherboard is the basis of your rig, and will dictate how well the rest of your PC's components perform." Commenting on the new release, James Lee, V.P of ASRock Sales and Marketing, is with confidence. "ASRock X79 Overclock KING Motherboard Series offer the Digi Power (the most stable CPU voltage), Premium Gold Caps (top-tier capacitors), X-FAN (the smart cooling design) and Game Blaster (a Sound & LAN 2-in-1 card exclusively offered from ASRock), everything essential for overclocking. Our exciting X79 mobos could boost the performance of any kind of PC!" He stated.

At the top of the ASRock's X79 range is the X79 Extreme9. ASRock X79 Extreme9 motherboard is the KING of the overclocking beasts. Overclocking is a safe and reliable method to squeeze more power out of the PC! Good power regulation is important for longevity and overclockability. There's an array of onboard overclocking designs that enthusiast could definitely appreciate. All series of ASRock X79 Motherboards support Digi Power. By adopting digital Pulse-width modulation (PWM), ASRock X79 mobos can provide CPU Vcore voltage more efficiently and smoothly. Another optimized solution for CPU Power is the advanced 16 + 2 power phase, offering sturdy components and unmatched overclocking capability. Top-class quality guaranteed Premium Gold Caps are 100% Japan-made solid capacitors. These caps are sleek, high gloss caps with a premium gold coating representing long life and stable performance.

Get The Maximum Memory Performance

Special highlight here is the newest XFast RAM technology. ASRock XFast RAM is integrated into ASRock Extreme Tuning Utility (AXTU). It fully utilizes the memory space that cannot be used under Windows 32-bit OS. XFast RAM also shortens the loading time of previously visited websites, making web surfing faster than ever. And it also boosts the speed when executing software with large file (i.e. Photoshop) up to 5 times faster. Another advantage of ASRock XFast RAM is that it reduces the frequency of accessing your SSDs or HDDs in order to extend their lifespan.

Not only focusing on overclocking characteristics, ASRock also pay attention on gaming demands. The top-end X79 Extreme9 mainboard comes with an exciting Gaming Blaster (exclusive to ASRock) that is able to deliver the breathtaking authenticity in sound and LAN.

ASRock Game Blaster is packed with the new earth-shattering Creative Sound Core3D quad-core sound and voice processor. It is designed to deliver sound and voice with unbeatable quality and accurate positional audio. It boosts gaming performance and allows users to morph their voice into miscellaneous characters which is amusingly funny. In addition to the independent audio processor, the ASRock Game Blaster also bundles with one PCIE Gigabit LAN. The integrated Broadcom BCM57781 controller is truly a single-chip solution for a Gigabit-Ethernet, providing extremely low power consumption designs. 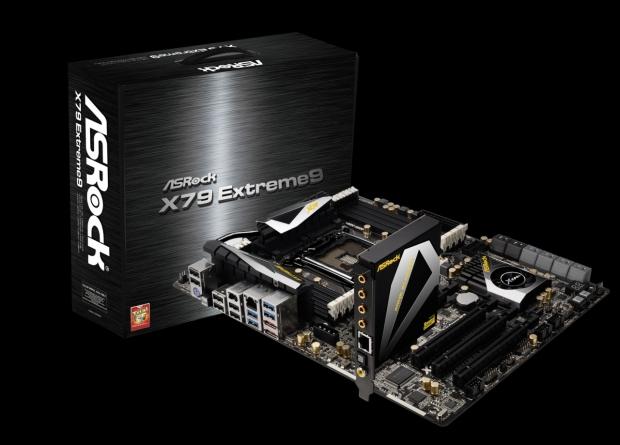 There's one Gigabit LAN port from Game Blaster, one from onboard rear I/O. Users are allowed to enjoy the Broadcom Dual LAN configuration with teaming function on ASRock X79 Extreme9 mainboard.

X79 Extreme9 is dedicated to deliver fantastic performance. The onboard Marvell SE9220 controller supports Hardware RAID, providing high levels of storage reliability. While the SSD and HDD are connected, the board supports HyperDuo Plus technology which can make the SSD become the cache of the HDD to enable SSD-like performance. ASRock HyperDuo Plus technology saves more time on data transmission and provides up to 6 times faster performance than a HDD-only system. 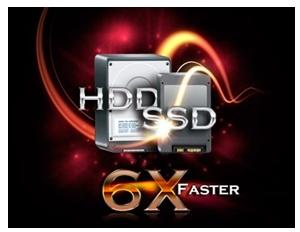 Other aspects of interest involving X79 and Sandy-Bridge-E include PCI Express going on-die and upgrading to 3.0. By adopting PCI-E 3.0 quick switch IC onboard, the ASRock X79 Extreme9 is hardware ready to support the Next-Gen PCI-E 3.0!* 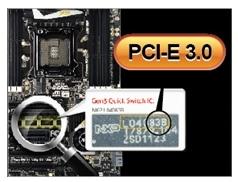 *PCI-E 3.0 requires both a supporting CPU and motherboard at the same time. Please check Intel website for information on future CPU updates and releases.

Greater air flow, faster heat dissipation! ASRock X-FAN could be found on ASRock X79 mainboards. It will be automatically activated only when the system rises to a certain temperature under heavy-loading. ASRock X-FAN allows the motherboard to breathe smoothly. Normally, it will remain deactivated to give users the quietest computing experience.

ASRock provides the most overclockable mainboards, allowing overclockers to get a fair chunk of extra performance from them for very little extra effort or danger. ASRock has five X79 boards in its mobo line-up from the all-shining, all-dancing flagship X79 Extreme9 to the quietly confident X79 Extreme3.

ASRock X79 Extreme9 keeps up the tradition of good build quality, using first-rate components and stable performance that has come to represent ASRock boards in recent times and ensuring you will get rock-solid stability out of the box.