REDMOND, Wash. - Oct. 5, 2011 - A new era in television begins this holiday where your entertainment becomes instantly searchable, easily discoverable and enjoyable in extraordinary new ways from a single device - Xbox 360. Today, Microsoft Corp. announced plans to roll out the next generation of TV entertainment on Xbox LIVE, the online entertainment service for Xbox 360. Nearly 40 world-leading TV and entertainment providers, including Bravo, Comcast, HBO GO, Verizon FiOS and Syfy in the U.S.; BBC in the U.K., Telefónica in Spain; Rogers On Demand in Canada; Televisa in Mexico; ZDF in Germany; and MediaSet in Italy, will begin rolling out entertainment services to the console this holiday, in more than 20 countries. 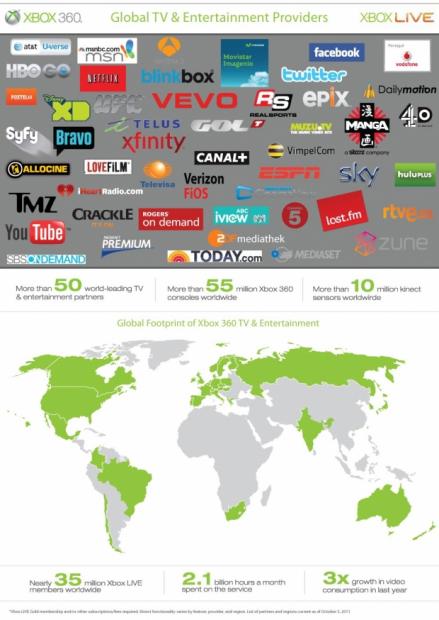 "Today's announcement is a major step toward realizing our vision to bring you all the entertainment you want, shared with the people you care about, made easy," said Don Mattrick, president of the Interactive Entertainment Business at Microsoft. "Combining the world's leading TV and entertainment providers with the power of Kinect for Xbox 360* and the intelligence of Bing voice search will make TV and entertainment more personal, social and effortless."

"We are continually evolving the television experience to bring Xfinity TV subscribers more personalized ways to search, find and watch the content they love," said Sam Schwartz, president of Comcast Converged Products. "Our recently launched next-generation Xfinity TV platform is enabling us to bring Xfinity On Demand to a gaming console for the first time, and Kinect's voice and gesture controls will offer our customers an innovative way to discover and enjoy Xfinity On Demand's huge library of top shows and movies."

Xbox 360 brings all your entertainment, friends and family together in one place. Now, easily switch from playing your favorite game with a friend out of state or even across the world to watching your favorite TV show with your family members on the same couch, all through Xbox LIVE. Ready to mix things up? Effortlessly switch from games to music to live TV and more, simply by telling your Xbox what you want to experience.

"Microsoft and Verizon share a common vision to transform the ways people enjoy and interact with the entertainment they want - what Verizon calls the borderless lifestyle," said Eric Bruno, vice president of consumer and mass business product management for Verizon. "FiOS TV on the Xbox 360 is an excellent example of how we're working with market leaders to erase old technology borders to expand the FiOS TV experience and taking advantage of unique new features including voice- and gesture-control of live TV entertainment via Kinect. This holiday, Verizon will bring a selection of popular live TV channels to Xbox 360 and will be a leader in delivering live, multichannel streaming HD TV, integrated with Kinect, via Xbox."

Xbox 360 is the first console to offer access to the world's greatest TV properties, including BBC, Channel 4, Channel 5 and LOVEFiLM in the U.K.; Antena 3, RTVE and Telefónica in Spain; Televisa in Mexico; and Bravo, Comcast's Xfinity On Demand service, Crackle, EPIX, Syfy, TMZ, "The Today Show," UFC, Verizon FiOS and HBO GO in the United States.

"We have been thrilled with the success of HBO GO. Our ongoing goal is to deliver HBO's acclaimed programming to our subscribers wherever and whenever they want it, and this relationship with Microsoft is another huge step in accomplishing just that," said Bernadette Aulestia, senior vice president, Domestic Network Distribution & Marketing, HBO. "HBO GO on Xbox is also a marriage of two pre-eminent brands - both with a reputation for delivering the highest quality of entertainment."

These new TV and video providers announced today join our existing lineup of great TV and video entertainment partners already on Xbox 360 - AT&T, Netflix and Hulu+ in the U.S., TELUS in Canada, BSkyB in the U.K., Canal+ in France, Vodafone Portugal, VimpelCom in Russia, and FOXTEL in Australia.

"Nearly a year ago, AT&T U-verse became the first TV provider in the U.S. to launch live TV on Xbox 360. Now we look forward to working with Microsoft to deliver even more innovative features that will allow U-verse TV customers to use voice and gesture controls to manage their TV experience," said Jeff Weber, vice president of video services, AT&T Mobility and Consumer Markets. "Through our Microsoft partnership, AT&T U-verse TV has been a leader in delivering a multiscreen and interactive TV experience that offers customers more personalization, more control and more integration across devices, all on the industry's only 100 percent IPTV platform."

Sports aren't just a game on Xbox 360. With live and on-demand content from ESPN in the U.S., UFC in the U.S. and Canada, GolTV in Spain and Maple Leaf Sports & Entertainment/Real Sports in Canada, Xbox 360 completely changes how sports fans experience and interact with their favorite pastimes. The all-new ESPN on Xbox LIVE features thousands of live events and video highlights with enhanced personalization features, split-screen viewing and an updated interface content guide that makes it easy for fans to find the highlights from the teams and sports they care most about. UFC on Xbox LIVE gives fans access to live pre-event videos, a catalog of on-demand video, an Interactive Fight Card and pay-per-view events in stunning HD all together in one place. The energy of the Octagon is coming right into the living room.

In addition to adding the world's largest TV providers and the best names in sports, the biggest names in Web video, news and music are also coming to Xbox 360, including AlloCine, Dailymotion, iHeartRadio, MSN with MSNBC.com, "The Today Show," TMZ, VEVO and YouTube. Whether catching up on the Web's latest viral videos, watching breaking news, sports and weather, listening to your favorite music, or sitting down to enjoy your favorite games, movies or TV shows - no other entertainment device brings it all together in one place like Xbox 360.

With Kinect for Xbox 360, there are no remotes, no buttons, no worries. Consumers will prefer to experience entertainment on Xbox 360 because it allows them to easily search and discover content across multiple entertainment providers within Xbox LIVE and interact and enjoy that content in extraordinary new ways. Gone are the days of managing a handful of remote controls, trying to remember what movies are available from what service, and hunting back and forth across television inputs. Using voice search with Bing on Xbox, easily look across a variety of branded services and play the programming you want without ever raising a finger. Having trouble finding last night's episode of "The Office"? It's now only a voice command away. Just say "Xbox, Bing, 'The Office,' " and Xbox finds it.

Not only is entertainment effortless on Xbox 360, it is more social and personal. Everything in Xbox has been designed to share with friends. Share recommendations, and show the Xbox LIVE community what games you're playing, movies you're watching and music you're listening to, as well as invite them to join in - even post your game achievements and info about your favorite movies directly to your Facebook wall from Xbox LIVE. It's simple: With your social network along for the ride, the world's leading content providers and the magic of Kinect, entertainment experiences are better on Xbox LIVE.

Xbox 360 is a premier home entertainment and video game system. Thanks to the addition of Kinect, Xbox 360 has transformed social gaming and entertainment with a whole new way to play - no controller required. Xbox 360 is also home to the best and broadest games as well as one of the world's largest on-demand libraries of music, standard- and high-definition movies, TV shows and digital games, all in one place. The entertainment center of the living room, Xbox 360 blends unbeatable content with a leading social entertainment network of nearly 35 million Xbox LIVE members to create a limitless entertainment experience that can be shared at home or across the globe. More information about Xbox 360 can be found online at http://www.xbox.com.