Four new SandForce(r) processor based SSDs for Macs and PCs offer up to 285MB/s sustained data rates, 7% over-provisioning for redundant data reliability, and lowest power use priced from $219.99 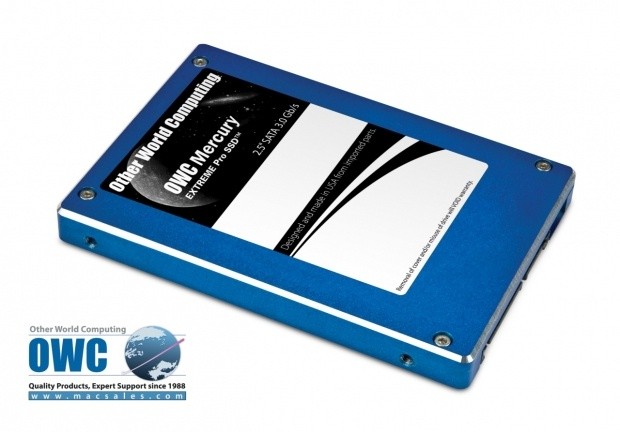 The OWC Mercury Extreme Pro SSD is available for immediate ordering in four Macintosh(r) and PC compatible configurations that install easily in notebooks as well as in desktop/towers with an adapter:

The new OWC Mercury Extreme Pro SSD models are an ideal way for typical Mac or PC desktop and/or notebook computer users to dramatically increase the performance of their machine. In a side-by-side comparison test (http://eshop.macsales.com/Customized_Pages/Framework.cfm?page=ssd-speed-test-feb-10.html) the OWC Mercury Extreme Pro SSD was able to boot the OS and load six apps in just over 30 seconds while the factory standard hard drive took nearly two minutes.

Because the OWC Mercury Extreme Pro SSD uses as little as 1/3 the power compared to the most power efficient 2.5" hard drives and up to 1/7 less power than other leading brand SSDs without any performance sacrifice, notebook users can now maximize their "unplugged" mobile use time while desktop/tower users can enjoy the benefits of a more energy efficient system.

"The four new OWC Mercury Extreme Pro SSD models give consumers the most affordable options for adding the pinnacle of internal drive performance to their Mac or PC," said Larry O'Connor, CEO, Other World Computing. "With category leading performance and technology features not found in other brands, these new models are ideal for everyday users seeking near instantaneous and reliable data access."

Other World Computing (OWC) has been providing quality hardware products and support to the computer industry since 1988 and features one of the largest online catalogs of computer, iPod(r), iPhone(r), and iPad(tm) enhancement products through its e-commerce portal www.macsales.com. As a Premiere Level Apple Developer Connection member, OWC also provides extensive US based technical support for Macintosh users around the world as well as Internet access via www.fastermac.net and www.owc.net