1 July 2019 - Buka Entertainment and Ravenscourt announce the new release date of the highly acclaimed top-down-action-brawler Redeemer: Enhanced Edition. The game will be available at the 19 of July for PlayStation 4, Microsoft Xbox, Nintendo Switch and PC both physically and digitally. 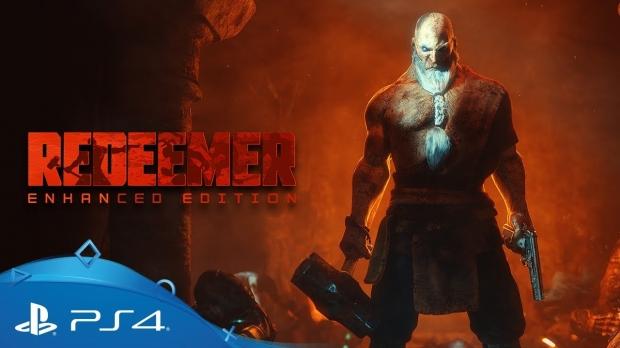 Artem Studenikin, PR-Manager at Buka Entertainment: "Players all around the world can't wait for Vasily to arrive in style on video game consoles. We're doing our very best so you could fully enjoy the Enhanced Edition. The final stage of quality assurance is underway at full speed to give you the true experience of the iconic brutal gameplay.Only a few days to go - meet Vasily on July 19th on consoles and PC!"

Redeemer: Enhanced Edition is an intense modern take on the Brawler genre where you will punch, hack and blast your way through enemies using fists, hammers, fire arms and even the environment.

Play as Vasily, once elite operative working for the biggest Cybernetic Weapon Manufacturer in the world, he narrowly escape to a secluded monastery when the corporation turned on him, willing to make him one of its cyborg soldiers.

For 20 years he tried to find peace and harmony amongst fellow monks until the corporation eventually found his trace and is now closing-in on Vasily's location In so doing, they have given him one last shot at redemption.

Koch Media is a leading producer and distributor of digital entertainment products (software, games and films). The company's own publishing activities, marketing and distribution extend throughout Europe and the USA. The Koch Media group has more than 20 years of experience in the digital media business, and has risen to become the number one distributor in Europe. It has also formed strategic alliances with numerous games and software publishers: Bethesda, Capcom, Kaspersky Labs, NC SOFT, Sega, Square Enix and Tecmo-Koei, etc. in various European countries. With Headquarter in Hafen, Austria Koch Media owns branches in Germany, England, France, Austria, Switzerland, Italy, Spain, the Nordic regions, Benelux, Australia, Czech Republic and the United States.