Austin, Texas, USA - 16 May, 2019 - Indie publisher Digerati is delighted to announce that release dates have now been confirmed for the arrival on consoles of Golem Gates. The acclaimed action-strategy card-game hybrid will launch on PlayStation 4 on May 28th, then on Xbox One (and as a full 4K gaming experience on Xbox One X) and Nintendo Switch on May 31st.

Developed by Laser Guided Games, Golem Gates is a post-apocalyptic sci-fi blend of action-strategy and card battler, pitting your conjured armies against otherworldly forces. An ancient threat surges from the Golem Gates, and only the Harbinger stands guard. Wielding the nanite-infused power of The Ash, you must protect a world ravaged by ancient wars. Choose from 100 cards (known as Glyphs) and unleash diverse units, buildings, buffs, and more in tactical combat across single player, co-op, and online multiplayer.

Randomized drawing and quick unit placement means you'll have to adapt on-the-fly as you formulate your strategy. Add more forces to a battle to turn the tide, transform a scouting party into an army, place emergency defenses to respond to the enemy, or hide an outpost in a direction the enemy doesn't expect. The choices are yours, but beware: the enemy will do the same and with the right Glyph your forces can be destroyed as fast as they were created. 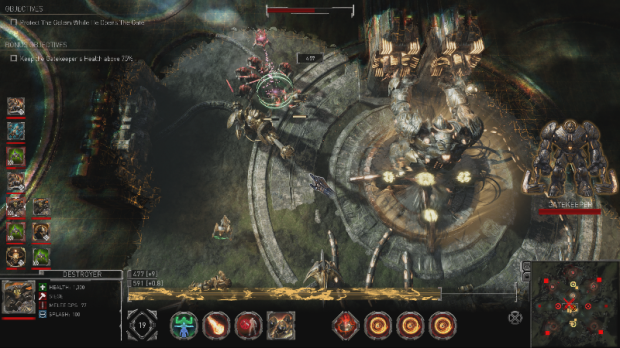 "Golem Gates is a great title and we wanted to make it the best it could possibly be on console. Laser Guided Games' vision has been fully retained and whether it's enjoying the game in 1080p, full 4K or on the go, Golem Gates has been fully optimised for every console platform and its individual capabilities," said Digerati Director Nick Alfieri.

"We are so excited that we can finally reveal Golem Gates' release date on console," said the game's creator, Matt Oelfke. "It's coming soon and we can't wait to see how console gamers take to the game. We've poured our heart and soul into Golem Gates, so we hope it resonates with players."

What critics are saying: "The demonic strategy game I love playing before bed." - Kotaku

As a publisher, Digerati is dedicated to helping independent developers bring their creations to market and into the hands of gamers. We take care of funding, distribution, marketing and production, leaving developers to focus on what they love - making incredible games and unique experiences.

Founded in 2012 by former Epic Games and Marvel staffers, Laser Guided Games is an independent video game developer dedicated to creating unique experiences. Its first title was the 2014 tactical vertical-scrolling shmup Revolution Ace, while its latest release is the RTS card combat hybrid Golem Gates, which launched on PC in 2018 and is coming to consoles spring 2019. https://www.laserguidedgames.com/