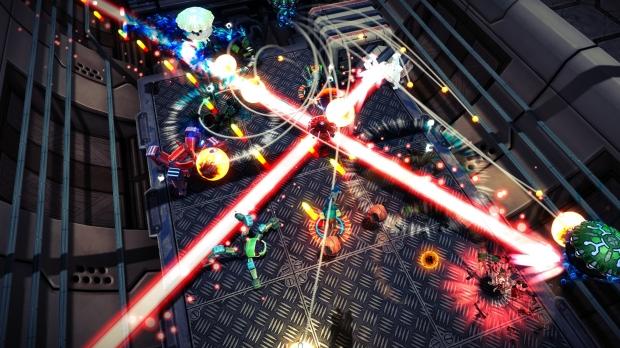 Assault Android Cactus+ debuts on Nintendo Switch with all-new features: Campaign+, new character costumes and aim assist options. Campaign+ reconstructs the original campaign with new enemy waves, more dynamic elements, and amped-up boss fights, all at 60 frames-per-second. Unlock a new costume for each of the nine androids while testing their unique load-outs to see what's most effective across 25 levels.

While Campaign+ and its new leader-boards are enticing additions for those familiar with the game, anyone can enjoy Cactus+'s frantic firefights with the addition of Aim Assist options. To let players get the most out of the local co-op experience, the game can be played with dual Joy-Con, Pro Controller and even single Joy-Con in any combination.

Recruit up to three friends and start shooting!

Lead Junior Constable Cactus and her Android friends as they respond to a distress call and finds a derelict space freighter under attack by its own robot workers. Keep the androids' batteries charged by embracing aggressive play and blasting hordes in frantic, 60 frames-per-second firefights.

"Assault Android Cactus+ has something for everyone," says Tim Dawson, director, Witch Beam. "We hope the fans that have supported us over the years will enjoy Campaign+, and we look forward to first-timers feeling confident with aim assist."