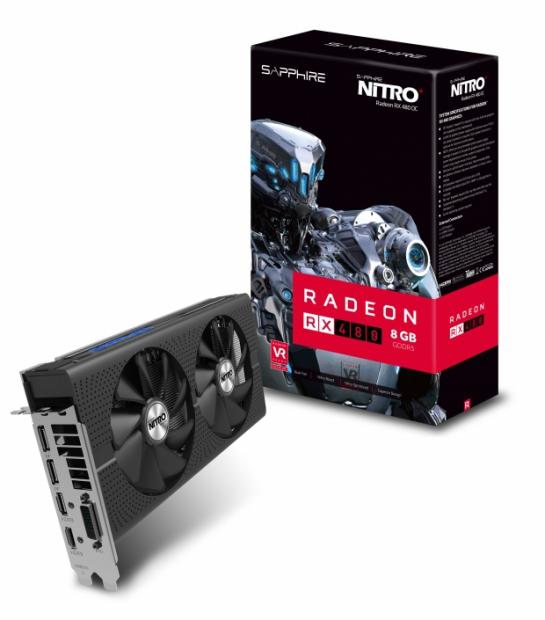 The SAPPHIRE NITRO+ Radeon RX 480 Gaming Series is designed for high-quality 1440p gaming. It features a 4th generation Graphics Core Next chip with an improved geometry engine, increased caches and native asynchronous shaders. The NITRO+ RX 480 8GB version comes with 2304 GCN-based stream processors that run with a factory-overclock boost clock of 1342 MHz. The model comes with a full 8 GB GDDR5 memory clocked at 2000 MHz on a 256-bit interface. The NITRO+ RX 480 4GB version delivers a factory-overclock boost clock of 1306 MHz with 4GB of GDDR5 memory clocked at 1750 MHz.

Powerful specs and VR-specific architectural optimizations, as well as the use of AMD LiquidVR technology, provide a premium Virtual Reality experience (scoring over 6.3 in a Steam VR Performance test), previously available only on significantly more expensive cards. The SAPPHIRE NITRO+ version is even more VR-friendly, with two HDMI ports: allowing the user to have both an HD monitor and cutting-edge VR headset running at the same time. 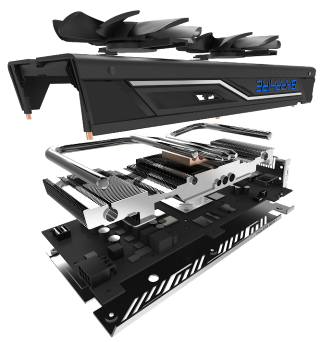 One of the most innovative parts of SAPPHIRE's first custom-designed Polaris card are the fans. The SAPPHIRE NITRO+ Radeon RX 480 features improved Dual-X cooling with two 95 mm dual-ball bearing fans that have an 85% longer lifespan compared to fans with sleeve bearings. The improvements to the fan blades means the solution is up to 10% quieter than the previous generation.

SAPPHIRE has also upped the stakes with its new Fan Check, which allows users to check the cooler's status via the upcoming SAPPHIRE TriXX 3.0 and immediately contact customer support in case of problems. To resolve a specific fan issue, Fan Service provides a quick and easy solution. If there's a fan issue detected, the user doesn't need to return the entire card - SAPPHIRE or its channel partners will send out a replacement fan directly to the customer.

On top of that, SAPPHIRE NITRO+ Radeon RX 480 fans use the Quick Connect system. This means they're easy to remove, clean, and replace, with just one screw holding them securely in place - without the need to disassemble the shroud or other parts of the card.

Improved Intelligent Fan Control III system turns off the fans completely in a low load situation and, with the help of the additional NITRO CoolTech, the fan starts precisely at 52 degrees Celsius to smartly balance performance against fan noise. 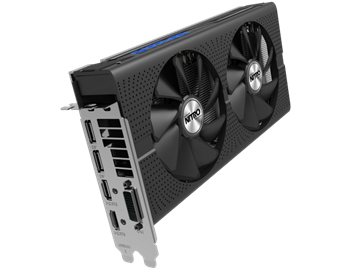 Just as important as the performance nowadays are the aesthetics of the hardware inside a user's PC. Equipped with new NITRO Glow, the NITRO+ Radeon RX 480 comes with a tasteful shroud design augmented by RGB LEDs. The user can customize the colours of the LEDs via software using the SAPPHIRE TriXX 3.0 utility or through hardware by pressing the red button on the back of the card. The system contains a set of five different modes, including Fan Speed Mode, GPU Temperature Mode or the colourful rainbow mode. The LEDs can also be turned off, if the user prefers so.

Power to the Power User

For overclocking enthusiasts, SAPPHIRE has added extra features to help get even more out of the new NITRO+ card. The NITRO Boost (Dual Bios) switch increases the boost clock and power limit for higher performance.The SAPPHIRE NITRO+ Radeon RX 480 also comes with an 8-pin power connector for additional powering: ideal for OC. SAPPHIRE's unique Black Diamond Chokes used in the new model are now Mark 4, reducing the coil temperatures by another 15% over the previous version. 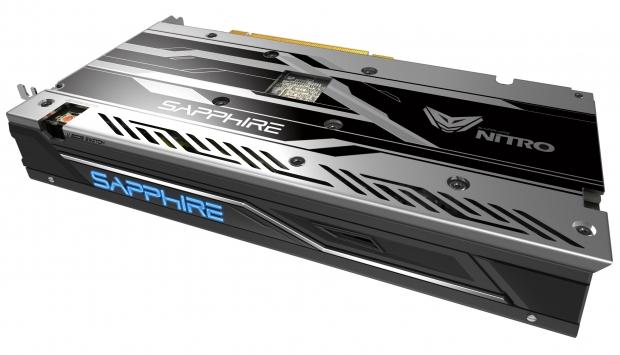 The SAPPHIRE NITRO Gaming Series cards come with Dual HDMI ports, specifically designed to work with VR. By having two HDMI ports, you can have both an HD monitor and cutting-edge VR headset running at the same time.

The ports are HDMI 2.0b, the latest update, with an 18Gbps bandwidth, up to 32 audio channels, and is able to support 4K 50/60 resolutions like 2160P, whilst remaining entirely backwards compatible with older HDMI specifications.

The Rise of Polaris

With the AMD Polaris chip produced in FinFET 14 nm lithography and the low power consumption that comes with it, the new SAPPHIRE NITRO+ Radeon RX 480 graphics card offers a new golden standard of power efficiency and work culture, while still leaving clear headroom for overclocking.

The new Polaris-based card also comes with a slew of display engine advancements. The Radeon RX 480 supports the next-generation of displays that feature High Dynamic Range (HDR) technology. HDR expands the range of colours and contrast ratios that can be shown, making HDR-ready games and movies appear sharper, more colourful and vivid on a compatible display. The new Radeon GPU comes with support for HDMI 2.0b and DisplayPort 1.4 to enable support for the latest monitors: 1080p @240Hz, 1440p @240Hz, 4K @120Hz, or even ultrawide 1440p @190Hz.

The Polaris chip features a hardware encoding/decoding for 4K recording using H.265 codec up to 60 FPS, making high-quality streaming and gameplay recordings a new reality with virtually no performance hit.

SAPPHIRE NITRO+ Radeon RX 480 will ship in July, and will be available from selected SAPPHIRE e-tailers and retailers worldwide.