Intel Skylake K series CPUs are on every hardcore overclocker's wish list, due to the fact that they are the only ones with an unlocked multiplier that allows users to overclock the CPU frequency effortlessly. However, there seems to be a shortage of these ultra high performing processors lately. Thankfully ASRock has prepared a nice Christmas present for the overclocking community named SKY OC, an alternative for users to overclock any Intel Skylake i7/i5/i3 or even Pentium non K CPUs on their ASRock Z170 motherboard. 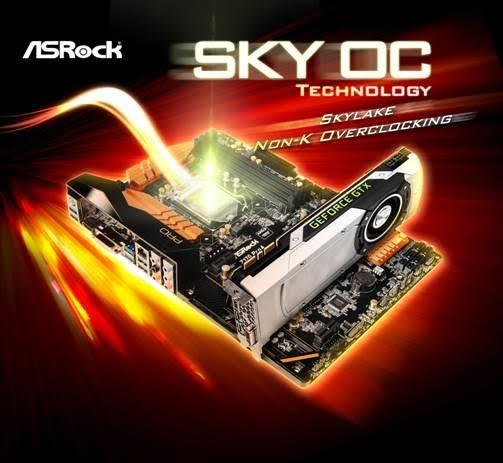 Engineers at ASRock picked up from where they left off last time, and decided that besides DDR4 memory modules, there might be a way to overclock Intel non-K CPUs without tinkering the multiplier. So here you have the game changing SKY OC which is obtainable simply by a BIOS upgrade from ASRock's official website. It's not the same as overclocking an Intel K series CPU, because it's mainly changing the BCLK, but it will be an interesting alternative while people are still waiting for their K series CPUs to come down the chimney. Lab tests show that the once not overclockable Intel Core i5-6400 CPU can now be overclocked up to a 60% frequency boost with SKY OC on ASRock's Z170 Pro4! 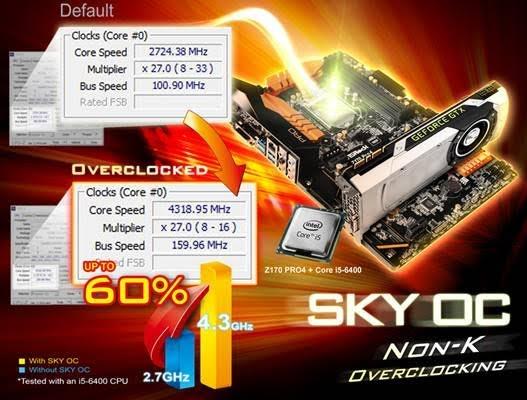 One might wonder, "this is too good to be true, what's the catch?" Well, if you had to ask, there are two almost unnoticeable limitations. The first one is the onboard Intel graphics will be disabled while SKY OC is applied, meaning that users are required to install a video card. The second limitation is that CPU Turbo Ratio and C-State will also be disabled.

While ASRock SKY OC breathes life into Intel non K series CPUs, currently it is still exclusive to motherboards with Intel's Z170 chipset. But have faith in ASRock's skillful engineers, sooner or later more Christmas gifts from ASRock are going to be delivered.

* The overclocking results may vary between different CPUs and hardware configurations.

** Due to future hardware/firmware updates or other reasons, the availability of SKY OC is subject to change without notice in advance.

*** There are certain risks involved with overclocking, such as damaging the CPU, memory module, power supply unit, or destabilizing the system. It should be done at your own expense. If you are unsure about the risks of overclocking, please seek professional advice.