It's not that hard to run Fortnite at 90FPS on the PC even at 1080p on a mid-range graphics card, but on a smartphone? It's a growing trend that the gaming smartphone companies like ASUS and Razer have been doing, thanks to Qualcomm's continued push in SoC tech with its Snapdragon range of processors.

OnePlus worked with Epic Games in order to balance the optimizations needed for the OnePlus-specific build of Fortnite, with GameSpot getting an exclusive look at the Unreal Engine-powered battle royale champion running at 90FPS on the flagship OnePlus 8 smartphone.

Quantic Dream unleashed their games onto the Epic Games Store not too long ago, but now it's time to release their games on Valve's digital storefront: Steam.

Detroit: Become Human, Heavy Rain, and Beyond: Two Souls will all drop on Steam on June 18 -- with demos to all 3 of those games available right now on Steam with some links below. The games were originally released as PlayStation 3 and PlayStation 4 exclusives, but now Quantic Dream is giving PC gamers the chance to play their games -- as the developer shifts into making multiplatform games.

I still remember wanting the NES Power Glove when it first debuted in the 90s, but the controller disappeared about as quick as it launched -- far ahead of its time. It's 2020 now, so let's re-visit, shall we?

Look Mum No Computer, or Sam Battle, has hacked himself an NES Power Glove into a quasi-gesture controller for his modular synth setup. Battle has to just slip his hand into the Power Glove, bend and wiggle his fingers, and he can make adjustments to the filter cutoff, pitch, pulse width, and volume of his audio.

Not just that, but he also made his own animatronic hand that takes input from the synth, to control the glove -- which, in turn, controls the synth. Geeky, garage band-y type of stuff and it's all with the Power Glove -- I love it.

The Switch Lite and transforming Switch have both sold over 800,000 units in the United States in April, the NPD Group reports. 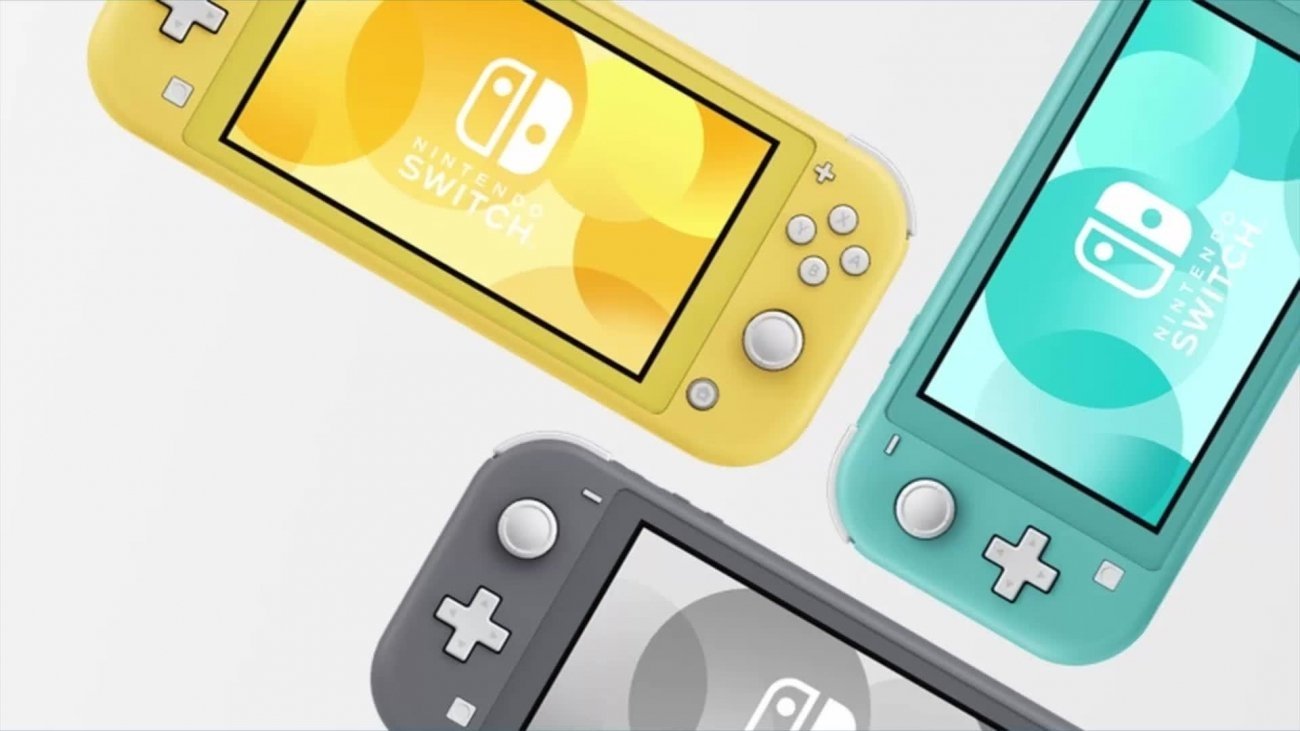 April 2020 was a huge month for the games industry thanks to coronavirus lockdowns. Not only have digital earnings hit a new high of $10.5 billion, but game spending in the U.S. is up to an all-time new April high of $1.46 billion.

Now we have more insight on how these numbers break down. Hardware was up an incredible 163% YoY to $420 million, driven primarily by the Nintendo Switch's huge sales surge. The PS4 and Xbox One also saw a hefty uptick in sales too, despite being 7 years into their respective lifecycles and a brand new console generation on the way.

Your state's favorite retro console: Is it N64, Gamecube, or PS2?

A neat little infograph from SatelliteInternet compiles Google Trends data to see which retro consoles U.S. states like the most. 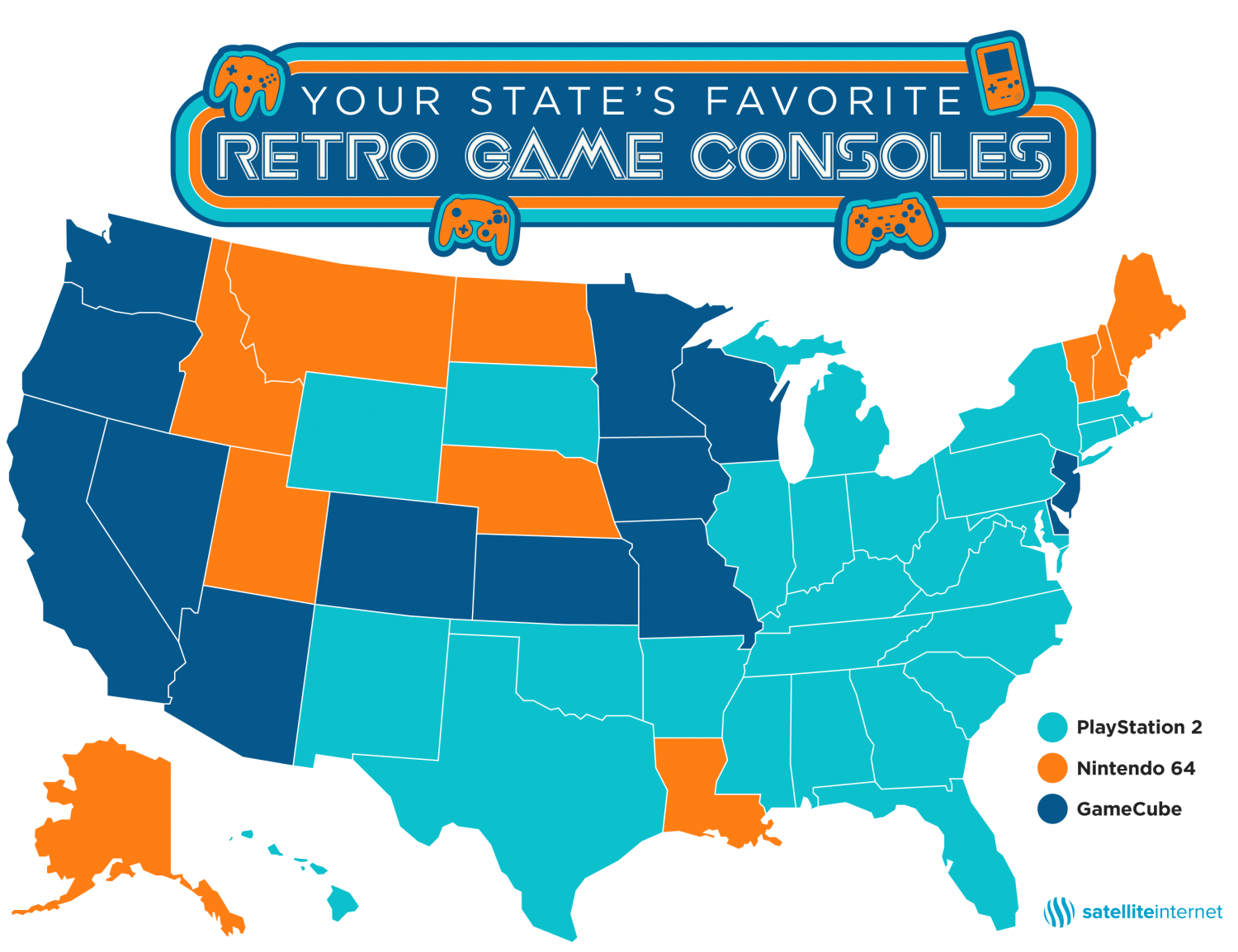 The data compares current interest in three systems across the continental United States--Gamecube, Nintendo 64, and PlayStation 2. The info isn't representative of total historic console hardware or software sales, but moreso the overall current Google Trends data. Basically the idea here is to see what retro console that each state is currently searching for.

So far the PlayStation 2 is the most popular. These findings show gamers are more interested in replaying old PS2 games than other systems. Second is GameCube, which is interesting considering the Nintendo 64 has outsold the GameCube by 11 million units in lifetime sales. Still, though, the GameCube's game library is more mysterious and harder to find. The N64 takes last place in overall U.S. state interest.

According to a new graphic from Learn Bonds, the console and handheld hardware market has sold over 1.56 billion units since the Atari 2600's release in 1977. But some of the numbers are off. 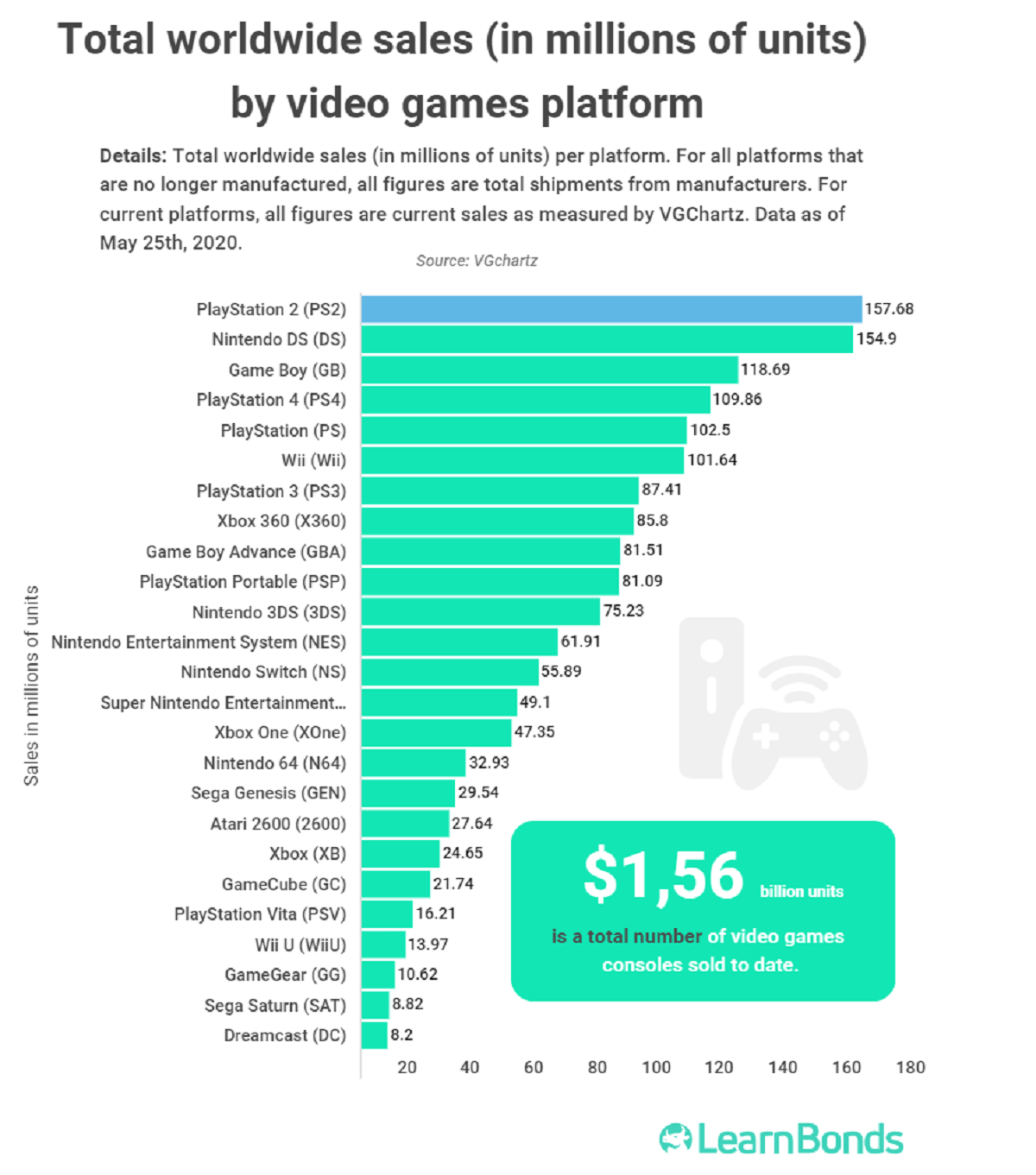 So just how many consoles, Gameboys, Game Gears, and other handhelds have been sold to date? The latest findings from Learn Bonds give us ballpark figures of how 25 platforms sold across multiple geneartions, but there's lots of caveats.

Call of Duty WWII is free with PS Plus...but why?

Sony's PS Plus lineup for June gets a nice bump with Call of Duty WWII, but it's a bewildering move from Activision. 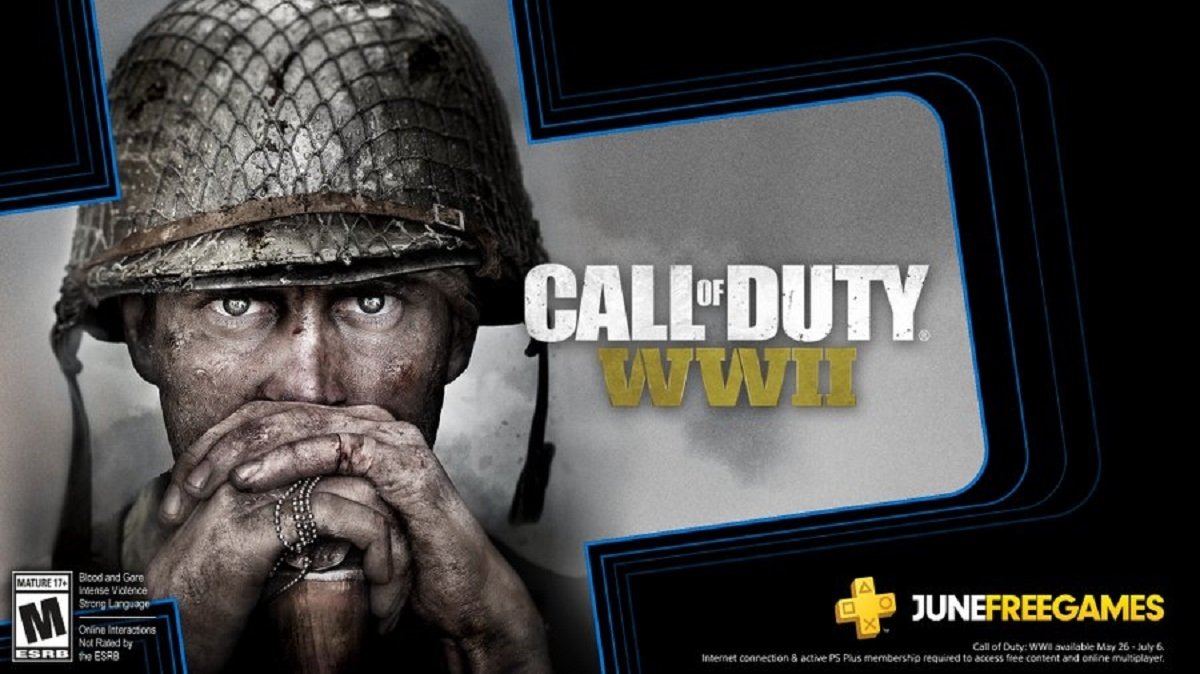 Today Sony confirmed Call of Duty WWII will be free on PS Plus in June. It's good news for gamers who can jump in and try it out and run through the campaign, but I'm curious why Activision greenlight this deal. Giving away CoD WWII will take attention away from Activision's real billion-dollar breadwinners: Modern Warfare and Warzone. It's a weird move because Warzone is already free-to-play and serves as an entry point to the franchise. We've gone over why Warzone is such a big deal in our previous coverage, but ultimately it only works if everyone's playing it.

Luckily for Activision most people who own a PS4 don't actually subscribe to PlayStation Plus. Right now PS Plus has 41.5 million users, meaning roughly 37% of the PlayStation 4's 110.4 million install base are subscribed. Still, though, that's a lot of people who will likely download CoD WWII, play the campaign, and try out multiplayer. Sure it's another method of monetization for Activision, but it's an older experience from 2017 and it just seems like a strange move to make when Warzone, Modern Warfare, and even the re-released Modern Warfare 2 remaster are all picking up big steam throughout 2020. 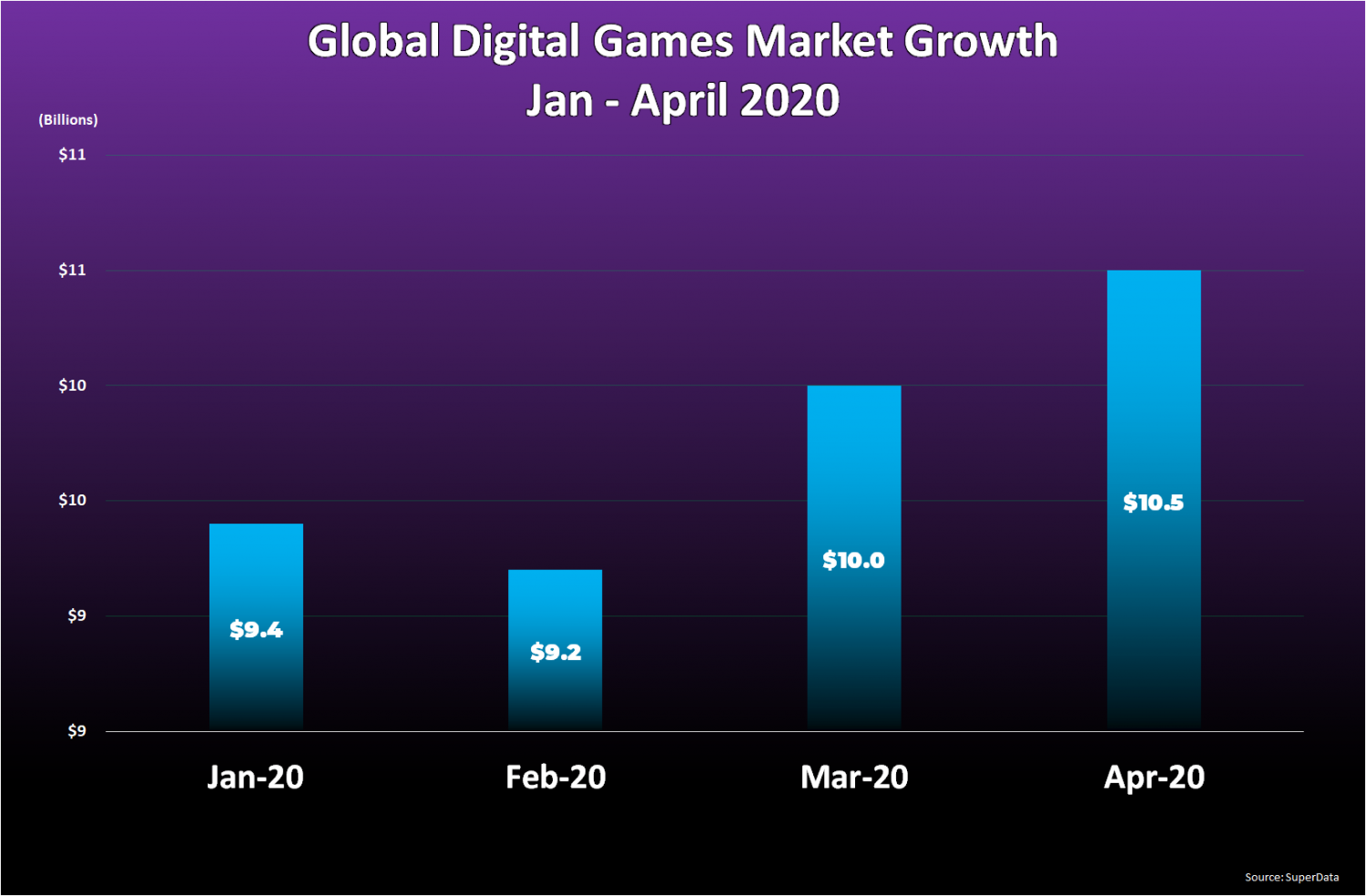 Console was up a huge 42% YoY thanks to big monetization and sales across an array of games, including GTA Online, Fortnite, and Warzone. Mobile shot up by 14% YoY, and PC jumped by 12%. SuperData didn't release the per-platform earnings so we can't do a direct comparison. We have quarter-over-quarter numbers but not year-over-year.

The PlayStation 5's and Xbox Series X's customized PCIe 4.0 SSDs have the potential to revolutionize gaming, and developers like Netherrealm's Ed Boon are excited to tap that raw power. 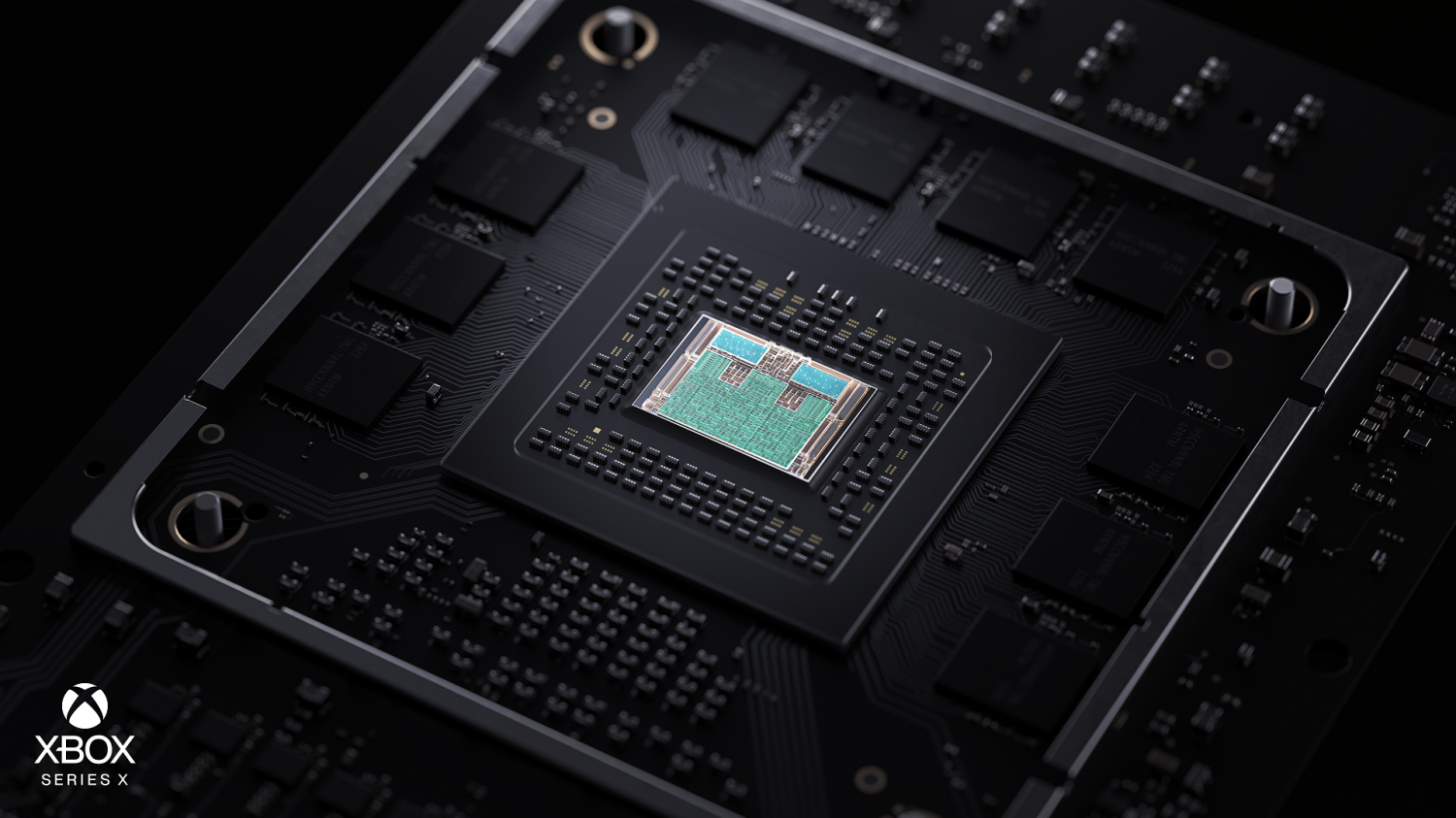 The Zen 2 and Navi 2X GPU upgrades in next-gen consoles are exciting, but that processing power would be hindered without an ultra-fast SSD to feed the system data and assets at blinding-fast speeds. The inclusion of SSDs in next-gen systems is big in itself, but the raw speed will push next-gen to a whole new level beyond current PC tech. The PS5 can transfer uncompressed assets at 5.5GB/sec, or 100x the PS4, and the Xbox Series X can hit 2.4GB/sec, 40x the Xbox One's HDD. This means no loading times, seamless gameplay, and will change how games are made and played.

Mortal Kombat creator Ed Boon is just one of the many devs who see great things in next-gen SSDs. "I think it's funny when these new systems come out, these new consoles, everyone's always like 'okay what do the graphics look like?' I think people underestimate the impact the almost-zero load times will have. That's suddenly going to open up new doors that just weren't considered possible before," Boon said in a recent interview with Geoff Keighley.

The Embracer Group (aka THQ Nordic) already owns 163 IPs across 92 studios, but it's still hungry for more. 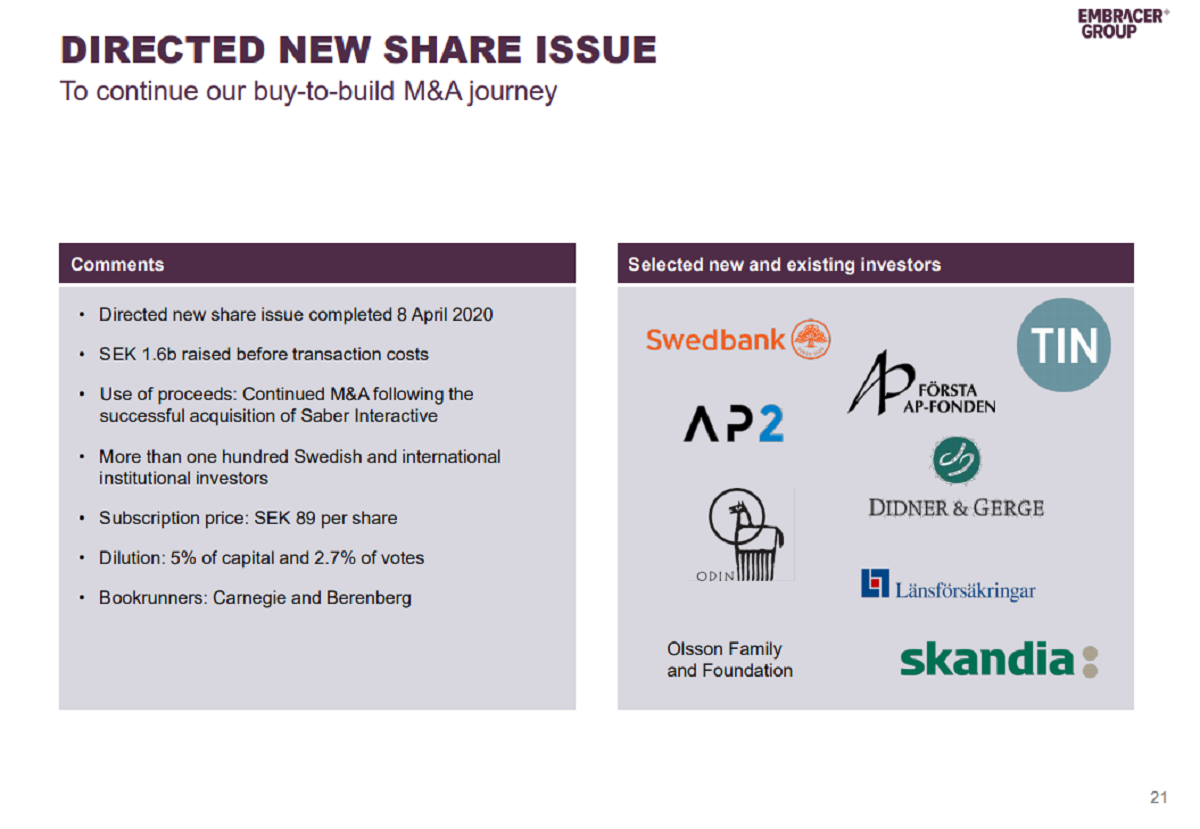 The Embracer Group might own more IPs than any other games company on the market today.The company has bought up a ton of IPs and studios, from Deep Silver's entire catalog under Koch Media (Saints Row, Metro, Dead Island) to yesteryear franchises like Kingdoms of Amalur, Timesplitters, and even Gothic.

But that acquisition spreed is far from over. Embracer is looking to grow, and it just got a big $161 million financing surge via a new share issue. Over 100 investors bought into the share issue so Embracer could "continue our buy-to-build M&A journey."