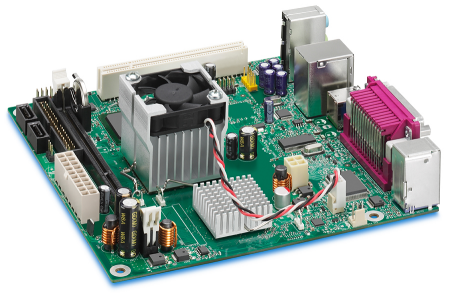 Intel's D945GCLF2 motherboard has the 45nm manufactured Atom dual-core 330 soldered onto it (now with active fan cooling due to extra heat generated by the additional core) and is designed for nettop systems such as the low cost ASUS Eee Box and MSI Wind desktop. Intel reckons it will work brilliantly as a second home system or for Internet kiosks, thin clients or POS (point-of-sale and not piece of... never mind) systems.

The Atom 330 runs on a 533MHz FSB which is the same as its single core brother and is powered by the 945GC Express chipset with built-in Intel Graphics Media Accelerator 950 - and no, you won't be able to play Crysis using this onboard GPU. There is a single DIMM socket designed to support up to 2GB of DDR2 667/533 SDRAM, which should be enough even for fairly basic Windows Vista usage. 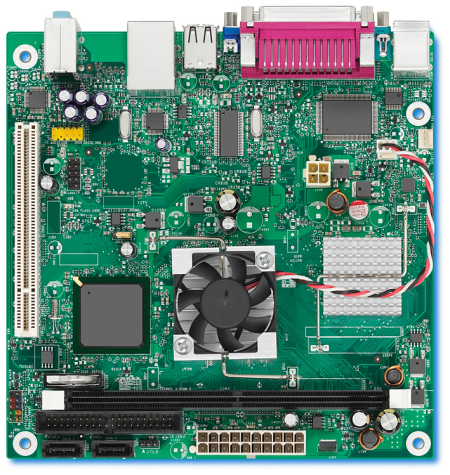 As far as expansion goes, Intel was kind enough to include two SATAII ports as well as an IDE connector supporting up to two ATA 100/66 devices for something like a DVD burner or a couple old hard drives being this mobo will support up to four drives. You could use the PCI expansion slot to add in an old RAID controller or maybe add in a TV tuner card. Let's hope in future versions the PCI slot is ditched in favor of a PCI-E slot, a single PCI-E 2.0 x16 slot would be lovely.

It also gets a single Gigabit Ethernet port and eight Hi-Speed USB 2.0 ports (four back panel ports and two onboard headers supporting four additional USB 2.0 ports). As far as video output goes, you can output via VGA or S-Video. A tweaked up version of this board with the PCI-E 2.0 x16 slot and HDMI output would surely begin to get more interested but it wasn't to be this time around.

You can read the full press release right here.