NASA's Hubble Space Telescope is more than 30 years old but is still producing jaw-dropping images of the cosmos. 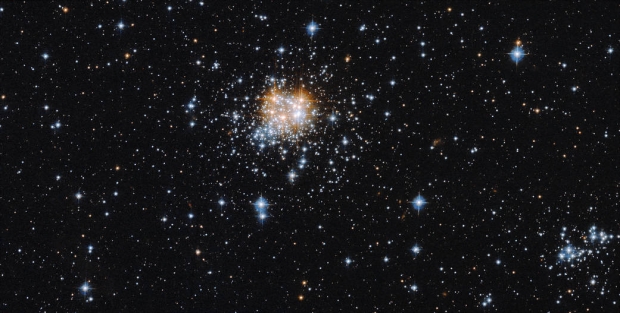 NASA has taken to its website to showcase an image of star cluster NGC 2002, located 160,00 light years from Earth, within the Large Magellanic Cloud, which is a satellite galaxy of our Milky Way. The space agency explains that NGC 2002 is approximately 30 light-years in diameter and is relatively young at just 18 million years old.

NGC 2002 contains about 1,100 stars, and according to NASA, the star cluster is an "open star cluster", which means that it has "low star density" and features an irregular shape as a result of the overall low gravitational attraction from the stars within the region. The opposite of an open star cluster is a globular cluster, which is when all of the stars are clumped tightly together, making it sometimes impossible for astronomers to observe individual stars.

That problem doesn't come up with open clusters, and as NASA points out, there are five red supergiant stars at the center of NGC 2002.

"Researchers used Hubble's high resolution and sensitivity at discerning individual stars to study NGC 2002. NGC 2002 contains about 1,100 stars. The more massive stars in the cluster tend to sink inwards towards the center, while the lighter stars move away from the center as the cluster evolves. Visible in the center of the cluster are five red supergiants, which are physically massive but cooler stars that are fusing helium after exhausting their hydrogen fuel," writes NASA.