With the completion of the first season of Amazon's The Lord of the Rings: The Rings of Power and the massive divide between those who enjoyed the show and those who didn't due to lore inaccuracies, many Tolkien fans are looking for some new Middle-Earth media to get excited about before the next season comes out two years from now.

Introducing, The Lord of the Rings: Return to Moria, developed by Free Range Games and published by North Beach Games. Return to Moria is a survival crafting game that is based in the fourth age of Middle Earth. The game focuses on the race of the dwarves and follows a group that deems it time to reclaim their legendary home of Khazad-dum, later called Moria (black pit), after the Balrog or Durin's Bane is awoken by dwarves delving too deep.

The trailer for the game was released back in June, but the creators behind the game recently appeared on the Nerd of the Rings YouTube channel to dive into its inner workings, what inspired the selected location for the survival crafting game, and how much of what players will see while exploring will be accurate to Tolkien's writings. Corey Olsen, a Tolkien scholar, is consulting on the game, and as explained during Nerd of the Rings' roundtable discussion, the content that players will experience in Return to Moria will be heavily based on Tolkien's writings. 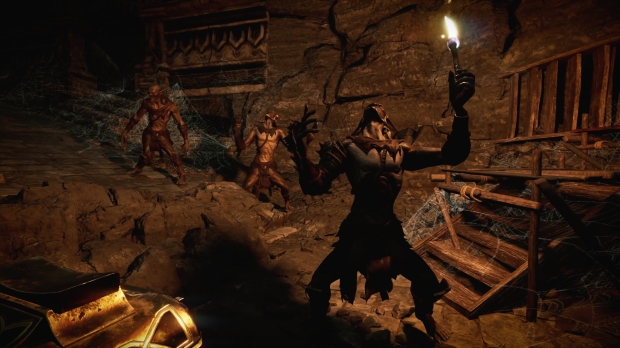 Olsen and lead narrative designer Farrha Khan were asked, "what parts of Tolkien's writings were you looking to for inspiration?". Khan explained that the developers had gone through literally every piece of Tolkien's writings on dwarves with multiple book clubs running simultaneously to extrapolate as much information out as they possibly could. Notably, out of the three main races in Middle-Earth - Elves, Men, and Dwarves - Tolkien wrote the least amount on the dwarves.

For hardcore fans of Middle Earth, hearing that the game developers are sticking to the writings of Tolkien will be very relieving/exciting.

The Lord of the Rings: Return to Moria will release sometime next year, and at the moment, it's only expected to release on PC on the Epic Games Store. However, the developers expressed interest in wanting to release it console and mobile, but didn't provide a date.