Researchers have proven for the first time that cells living in a petri dish can be taught how to play a simple game, like Pong.

A newly published study in the scientific journal Neuron details a group of researchers that took 800,000 mouse and human brain cells, placing them in a petri dish that they named DishBrain. The team was able to grow the cells by placing them on top of a microelectrode arrays, which stimulated the cells and also read their activity. Through this technology, the team was able to teach the cells to be able to perform goal-directed tasks and in this instance, to successfully teach the group of cells to play the classic computer game, Pong.

Using the microelectrode arrays and close up monitoring of the cells activity, the scientists were able to inform the cells on where the Pong ball was located and how to move the paddle up and down to deflect the incoming ball. The researchers explain that this new capacity to be able to teach cells to perform tasks and have those tasked represented in a virtual environment hasn't been achieved before.

"We have shown we can interact with living biological neurons in such a way that compels them to modify their activity, leading to something that resembles intelligence In the past, models of the brain have been developed according to how computer scientists think the brain might work. That is usually based on our current understanding of information technology, such as silicon computing," says lead author Dr. Brett Kagan. 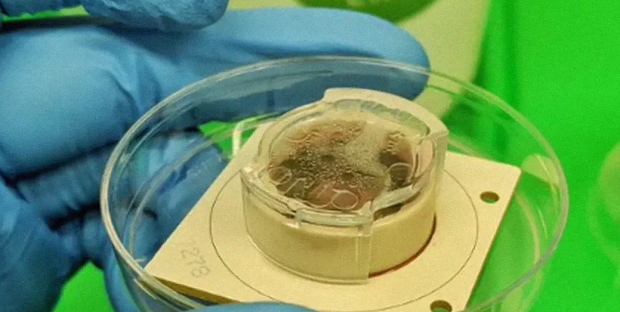 "We know our brains have the evolutionary advantage of being tuned over hundreds of millions of years for survival. Now, it seems we have in our grasp where we can harness this incredibly powerful and cheap biological intelligence," says Dr. Adeel Razi. He is the Director of Monash University's Computational & Systems Neuroscience Laboratory.

A visual representation of the simulated Pong environment. Neuron activity is represented in tiles growing in height

According to Adeel Razi, the director of Monash University's Computational & Systems Neuroscience Laboratory and study co-author, the ripple effect of such a scientific achievement will have far-reaching implications for developments in technology, health and society in general as researchers have successfully demonstrated that they can modify the stimulation of the cells to get them to change their behavior.

"The translational potential of this work is truly exciting: it means we don't have to worry about creating 'digital twins' to test therapeutic interventions. We now have, in principle, the ultimate biomimetic 'sandbox' in which to test the effects of drugs and genetic variants - a sandbox constituted by exactly the same computing (neuronal) elements found in your brain and mine," said Karl Friston, a theoretical neuroscientist at UCL, London.

The findings from the study may also lead to creating an alternative to animal testing for new drugs or gene therapies, as researchers will be able to instruct the human/mouse cells to interact with the drug and monitor that interaction in real-time, making changes where they see fit. Interestingly, the researchers state that when DishBrain was presented with structured information it behaved as a dynamic system that changed and adapted its behavior. These changes increased over time and were consistent with a cells' learning rate.

It should be noted that this discovery is still in the early stages, and is being labeled as new area of science or "virgin territory".