Neil deGrasse Tyson has explained on his radio show StarTalk just how big numbers can get, including a physical representation of $100 billion.

Posted to deGrasse Tyson's personal TikTok account, the famed astrophysicist began with Amazon founder Jeff Bezos' net worth, which is currently about $130 billion. deGrasse Tyson rounded down to $100 billion and explained that if each of the bills in the $100 billion was placed end-to-end, it would wrap around the Earth two hundred times. Additionally, with the leftover money, deGrasse Tyson explained that if the notes were placed vertically, the stack would reach the moon and back ten times over.

Using the same framework outlined by deGrasse Tyson, SpaceX and Tesla CEO Elon Musk, who has an estimated net worth of $230 billion (rounded down to $200 billion), would be able to achieve all of the aforementioned feats twice over. The astrophysicist continued to higher numbers and said that humans experience 1 billion in seconds, with most occurring during their 31 years alive as it takes 31 years to count to 1 billion. To illustrate 1 trillion, deGrasse Tyson, it would mean it would take 31 years times 1,000 - equaling 1 trillion. 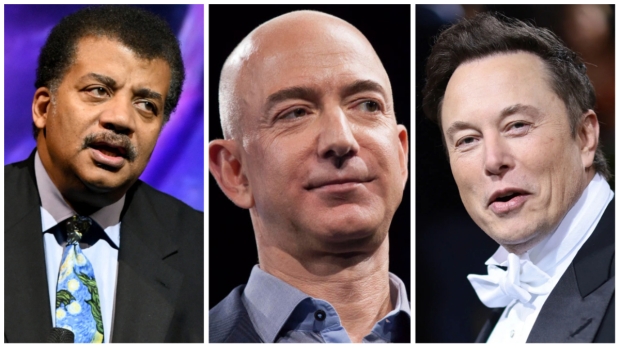 Moving on to even larger numbers, deGrasse Tyson mentioned quad trillion (15 zeroes), which is 1,000 times 1 trillion. deGrasse Tyson said he calculated that 100 quad trillion is the estimated number of sounds and words ever uttered by every human that has ever lived. The numbers don't stop there, though. Next is quintillion, which is 1 with 18 zeros on the end of it, which, according to deGrasse Tyson, is about the number of grains of sand found on an average beach.

Sextillion is next, which is 1,000 times bigger than a quintillion, and that number is a 1 with 21 zeros behind it. deGrasse Tyson says sextillion is the estimated number of stars in the universe. Next is a 1 followed by 23 zeros, and is called a "mole", which "how many particles of a substance occupy a specified mass of that substance", per deGrasse Tyson. The astrophysicist gives an example by saying there are more water molecules in a single glass of water than there are glasses of water in all the world's oceans.