Samsung Germany has asked a customer to physically smash his Samsung 980 PRO SSD with a hammer, or drill through it, before returning it for RMA... and we're totally not joking around. 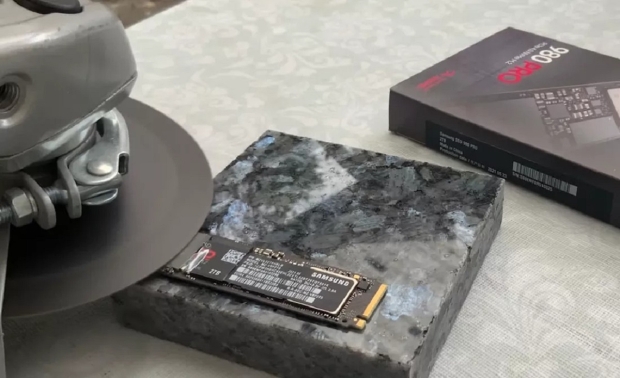 It seems that things are serious in Samsung Germany when it comes to making sure your data is completely protected, where Igor's Lab reports on a story about a user that was sent through a bunch of hoops in order to get his Samsung 980 PRO SSD replaced. It started out with the usual serial number, proof of the failure itself, what steps you've done to try and fix it, and more.

A diagnostic scan through Samsung Magician was run, showing that the Samsung 980 PRO SSD had indeed had multiple errors on the NAND flash. From there, the drive is usually returned... but that's not what happened here. Samsung Germany and the customer in question talked over the phone, and after writing an explanation as to why the SSD couldn't be returned as it is, things got weird.

Samsung Germany then asked the customer to directly "drill holes in the SSD or smash it with a hammer" but if that wasn't enough, for the owner to take photos or better yet, video of the act as it's happening. The company wanted to make absolutely sure there was no data that could be accessed, and seeing holes drilled through NAND flash will do that for you.

That's when Igor stepped in, using a grinder on the Samsung 980 PRO SSD... aaaand dead. The drive, in its destroyed state, has been sent back to Samsung, and still... still, the customer is waiting on his SSD being replaced.