If you're old enough then you'll remember the GHz race of the day between Intel and AMD, the race towards 1000MHz (1GHz) was a huge deal... and then we went to dual-core CPUs, and the Pentium brand was left behind for entry-level CPUs in the last decade. 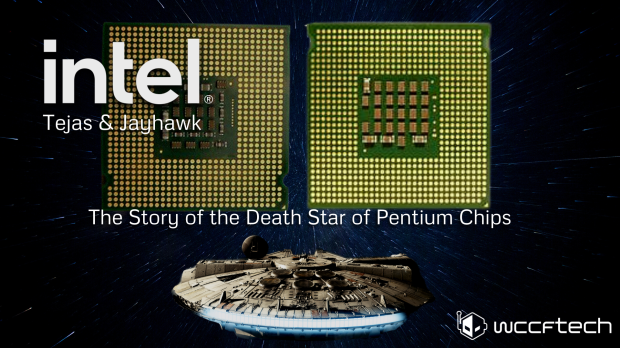 But man, did Intel have a huge plan for the Pentium CPU family with Project Tejas and Jayhawk, where after all of these years we're hearing about the next-gen Pentium 5 projects that were headed towards 7GHz. Intel kicked off Project Tejas in 2003, expected in 2004 and later pushed into 2005 after issues forced Intel to redesign the chip. Before the company could do that, the Tejas Project was shelved on May 7, 2004.

Intel Prescott CPUs could hit 5GHz+ but had huge power and temperature numbers, but Tejas was expected to clock higher than Prescott -- with Intel chasing the huge 10GHz CPU clocks within 10 years between 2000 and 2011 -- but it ended up not happening at all. AnandTech was the last to report on the Tejas processor, but now Fully Buffered has a new video after getting his hands-on Tejas and Jayhawk processors from John Culver of CPU Shack (eBay) for an "undisclosed amount" of money.

Steve Fischer was one of the Intel engineers that worked on the Tejas and Jayhawk CPUs, who explained: "Tejas was primarily led and developed by an engineering team based in Austin, and the Folsom processor development team playing a large existing role. Folsom had more is and designed for manufacturability expertise based on earlier P6 and P4 derivative product developments, while the Austin team was newer to intel but with some different microarchitecture expertise brought in from the outside like former Power PC engineers".

Fischer continued: "I came into this project late having spent a couple of years doing something completely different at one of intel's acquisitions during the .com boom [...] after returning to intel I focused on microcode development. With these efforts are first being applied on Prescott and then later on Tejas the latest and greatest P4 product. The thing had a pipeline depth of around 50 stages and an expected clock target at one point north of 7 GHz".

"I call the thing "the Death Star of processors" and half-jokingly reasoned that consumer acceptance of liquid-cooled chassis would not be a big deal. By mid-2004, I believe I'd moved on to lead the microarchitecture activities [at Intel]".