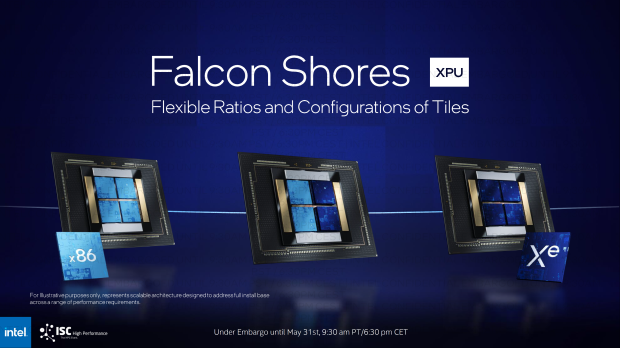 The new Intel Falcon Shores XPU is described as a "New Tile-Based Flexible & Scalable Architecture" by the company, with three different configurations shown off: a completely x86 Tiled solution, an Xe GPU Tiled solution, and another that glues both x86 CPU cores and Xe GPU cores together on a single socket.

Intel is going with at least four Tiles on all of its Falcon Shores XPUs which matches the Tile layout of the Intel Sapphire Rapids Xeon CPU family, but then Intel is making some huge performance claims here. Falcon Shores XPUs will be delivering 5x the performance/watt, 5x the Compute density in x86 socket, and 5x memory capacity and bandwidth. 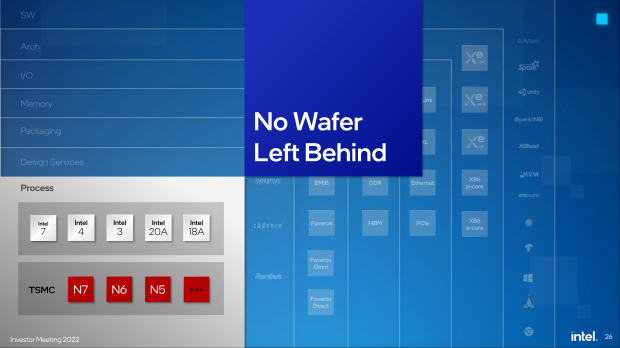 The "next-gen flexible architecture" has Intel whispering sweet nothings into the rumor mill of the "Angstrom Era" process node, which should end up being Intel 20A or Intel 18A. 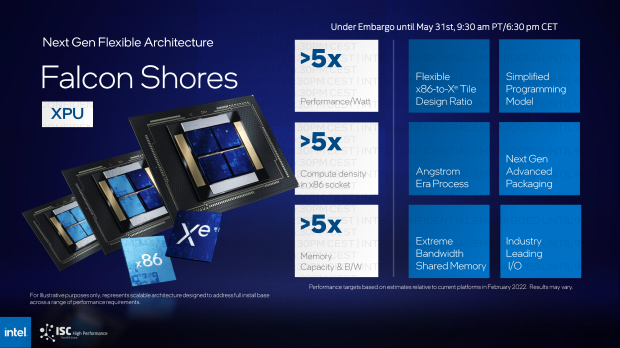 Intel explained: "Looking ahead, Falcon Shores is the next major architecture innovation on our roadmap, bringing x86 CPU and Xe GPU architectures together into a single socket. This architecture is targeted for 2024 and is projected to deliver benefits of more than 5x performance-per-watt, 5x compute density, 5x memory capacity, and bandwidth improvements".