All NewsBusiness, Financial & LegalCases, Cooling & PSUContests & GiveawaysCPU, APU & ChipsetsDealsDisplays & ProjectorsGamingMotherboardsScience, Space & RoboticsStorageVideo CardsVirtual & Augmented Reality
All ReviewsAll ArticlesAudio, Sound & SpeakersCases, Cooling & PSUCPUs, Chipsets & SoCsComputer SystemsDisplays & ProjectorsGamingMotherboardsNetworkingPeripheralsRAMStorageVideo Cards
GuidesGamingAsk the ExpertsNewsletterAboutForums
RTX 3090 TiRTX 4090Diablo 2GTA 6Halo InfiniteElon MuskRTX 3080HDMI 2.1
CPUs, Chipsets & SoCs
For those that thinks the AMD 790X boards are too expensive but still wants to have the option to run CrossFire, abit has come to the rescue with their new AX78 board which is based on the AMD 770 chipset. Normally this chipset doesn't support CrossFire but abit has done some clever engineering and managed to enable it, although it's more as in the way that you can run CrossFire on a P35 chipset than the real deal.

This still looks like a decent board even if you're not considering going CrossFire with it, as it has 3 PCI slots and one x1 PCI Express slot on top of the two x16 slots, although as with the P35 chipset, the second slot is limited to x4 bandwidth. The board is passively cooled and it's pretty well spec'd for an entry to mid-range board. 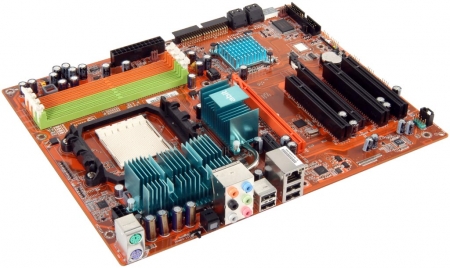 It has four rear USB 2.0 ports, Gigabit Ethernet, 7.1-channel sound with optical S/PDIF out and a rear CMOS reset switch. There are headers for a further six USB 2.0 ports and it has a connector for digital audio pass-through to a graphics card. It also has four memory slots and four SATA connectors as well as a single IDE and floppy connector.

The only thing that doesn't look so great and which is oddly enough something abit is highlighting in the press release is the fact that the board only has a four-phase PWM design, this isn't great for overclocking, but still better than some other designs on low-cost boards.

No actual release date was mentioned in the press release, but we'd expect that abit will be shipping these as soon as they get them from the factory. The product page wasn't up at time of publication, but you should be able to find it here once abit puts it up.
Newsletter Subscription