Elon Musk owns a 9.2% stake in the second-largest social media company in the world -- Twitter -- sending Twitter shares up 25% when the news broke an hour ago.

A new filing shows that SpaceX and Tesla founder Elon Musk owns 73.5 million Twitter shares, which are valued at around $2.9 billion. The shares are held by the Elon Musk Revocable Trust, of which Musk is the sole trustee.

Wedbush analyst Dan Ives wrote in a note: "We would expect this passive stake as just the start of broader conversations with the Twitter board/management that could ultimately lead to an active stake and a potential more aggressive ownership role of Twitter".

It was only last week that Musk said he was "giving serious thought" to building out his own social media platform, and now he owns 9.2% of Twitter -- which, BTW is over 4x which Twitter CEO Jack Dorsey owns, with just 2.25% -- one has to wonder what Musk is going to do.

"Amount beneficially owned: 73,486,938 shares consisting of shares of Common Stock held by the Elon Musk Revocable T 2003 for which Eon Musk is the sole Trustee". 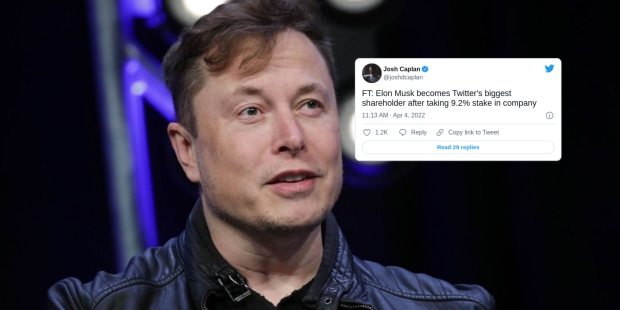