All NewsBusiness, Financial & LegalCases, Cooling & PSUContests & GiveawaysCPU, APU & ChipsetsDealsDisplays & ProjectorsGamingMotherboardsScience, Space & RoboticsStorageVideo CardsVirtual & Augmented Reality
All ReviewsAll ArticlesAudio, Sound & SpeakersCases, Cooling & PSUCPUs, Chipsets & SoCsComputer SystemsDisplays & ProjectorsGamingMotherboardsNetworkingPeripheralsRAMStorageVideo Cards
GuidesGamingAsk the ExpertsNewsletterAboutForums
RTX 3090 TiRTX 4090Diablo 2GTA 6Halo InfiniteElon MuskRTX 3080HDMI 2.1
AMD's new platform codenamed Spider has made its way onto the internet and it looks like quad CrossFireX is on the menu. The pictured system contains an RD790FX based board with a Phenom processor of unknown speed, but most importantly, it has four Radeon HD 3850 cards in it.

The system appears to be all up and running, but we wouldn't bet on the fact that the quad CrossFireX setup is working properly, bridges connected or not. We're also curious as with regards to how the first and the last cards communicate with each other, as there's no direct connection between the two, unlike Nvidia's three-way SLI which connects all three cards together. 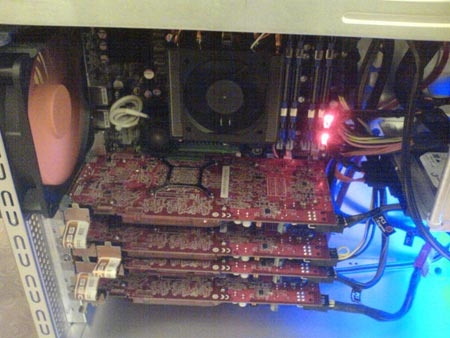 There are also some pictures of another system with a single Radeon HD 3870 running some DirectX 10.1 demo's on the Chinese blog that posted the original pictures. You can find several more pictures here
Newsletter Subscription