All NewsBusiness, Financial & LegalCases, Cooling & PSUContests & GiveawaysCPU, APU & ChipsetsDealsDisplays & ProjectorsGamingMotherboardsScience, Space & RoboticsStorageVideo CardsVirtual & Augmented Reality
All ReviewsAll ArticlesAudio, Sound & SpeakersCases, Cooling & PSUCPUs, Chipsets & SoCsComputer SystemsDisplays & ProjectorsGamingMotherboardsNetworkingPeripheralsRAMStorageVideo Cards
GuidesGamingAsk the ExpertsNewsletterAboutForums
RTX 3090 TiRTX 4090Diablo 2GTA 6Halo InfiniteElon MuskRTX 3080HDMI 2.1
GPS & Location
E-Ten has announced that it's finally shipping the Glofiish X800 and the company also released its X600 at the same time. The X800 was shown back at Computex earlier this year, but it has taken this long for it to become available. It features a 500MHz Samsung SC3 2442 processor and it has 256MB of flash memory and 64MB of RAM. The screen measures 2.8-inches and has a 640x480 resolution. 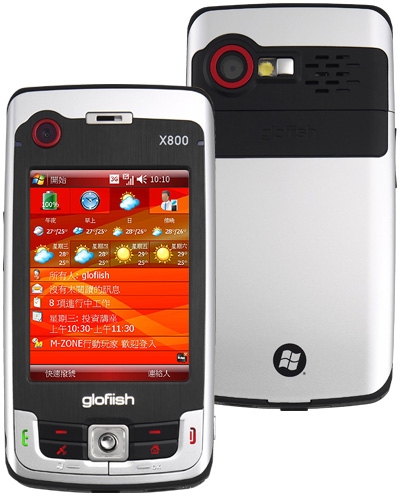 As with previous devices from E-Ten the X800 also features a built in SiRF Star III GPS unit and it also features a 2Megapixel camera with LED flash as well as a front mounted camera for video calls. Memory expansion comes in the shape of micro SD card slot, it can be connected to your PC via a mini USB port and it even has a built in FM radio.

It doesn't support 3G, but it's still a quad band GSM device with GPRS class 10 support. It also has 802.11b/g Wi-Fi and Bluetooth 2.0 with EDR. It also has the same SiRF Star III GPS module built in and a 2Megapixel rear mounted camera.

Neither device is up on E-Ten's English website as yet, but hopefully they'll appear there shortly. We're expecting an X800 review unit to arrive, so look out for the review in the near future.
Newsletter Subscription