With a new Fallout game more than 5 years away, Fallout 76 isn't going anywhere. Bethesda has revealed the new content coming to Fallout 76 to carry the game through 2022. 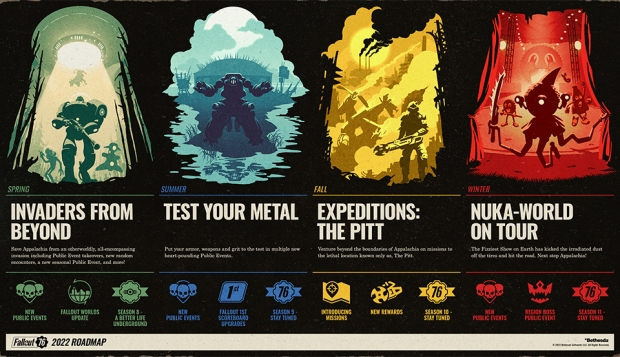 Fallout 76's 2022 roadmap will introduce one of the most ambitious new content drops to date. Later in the year during the Fall season, Bethesda plans to roll out Fallout 76's first-ever expedition to The Pitt, a region previously explored in Fallout 3's original DLC. Expeditions, which are basically bite-sized instances outside of the main Appalachia zone, were originally announced in April 2021 and have been a long time coming to Fallout 76 and original D.C. assets have been in the source files for quite some time.

The main 2022 roadmap cadence looks like this: Every quarter (3 months) gamers will get a new season alongside special themed content, which can include public events, rewards, missions, etc.

Spring 2022 Invaders From Beyond