Researchers from New Zealand's National Institute of Water and Atmospheric Research (NIWA) were responsible for the finding the specimen. 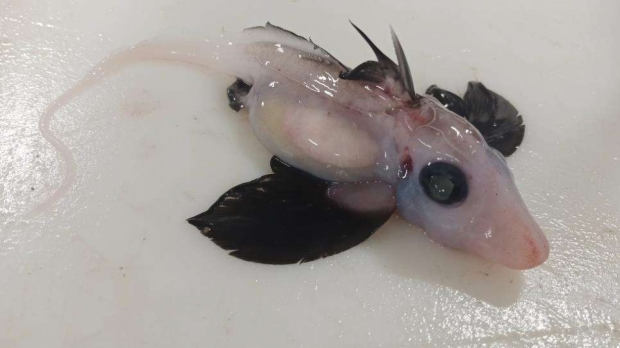 The NIWA researchers found the chimaera, known as "ghost sharks," near New Zealand's South Island. The chimaera is a neonate, meanly newly hatched, about 1200 meters (4,000 feet) deep on the Chatham Rise while surveying the area to estimate the local populations of Hoki, another fish. They are cartilaginous relatives of sharks and rays, meaning fish with skeletons made of cartilage and not bone.

Chimaeras lay their embryos on the seafloor, where they feed on the yolk within their egg capsule before hatching. The team will be conducting further tests and genetic analyses to determine which chimera species the catch belongs to, as there are currently fifty-two known species living in the deep ocean.

"You can tell this ghost shark recently hatched because it has a full belly of egg yolk. It's quite astonishing. Most deep-water ghost sharks are known adult specimens; neonates are infrequently reported so we know very little about them," said NIWA Fisheries Scientist Dr Brit Finucci.

"From better studied chimaera species, we know that juveniles and adults can have different dietary and habitat requirements. Juveniles also look dissimilar to adults, having distinctive colour patterns. Finding this ghost shark will help us better understand the biology and ecology of this mysterious group of deep-water fish," Finucci continued.