A new update for Dying Light 2 has been released onto the PC version of the game, with patch 1.04 now live for PC gamers -- but Xbox Series X gamers are in for a treat when the new patch arrives on their consoles.

Dying Light 2 developer Techland has already pushed out multiple hotfixes for the game, but now there's a big patch on the way for all platforms. The PC version of the game gets multiple improvements, with "DLSS improvements" for GeForce gamers.

But the Xbox Series X version of Dying Light 2 will be getting some lovin' with a new 60+ FPS Variable Refresh Rate (VRR) mode, exclusive to XSX and not the Xbox Series S console. Not the PlayStation 5 at this point.

We Are Working On: 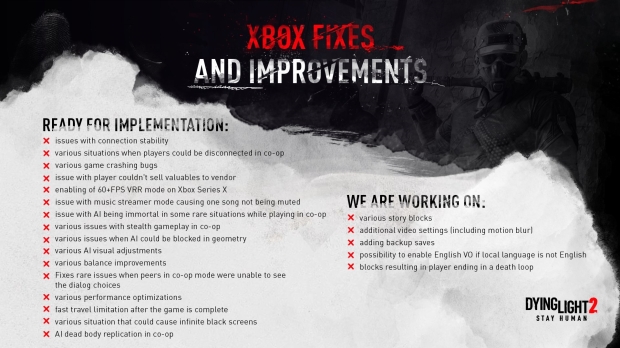