The black hole is found deep within the Andromeda Galaxy, inside B023-G078. 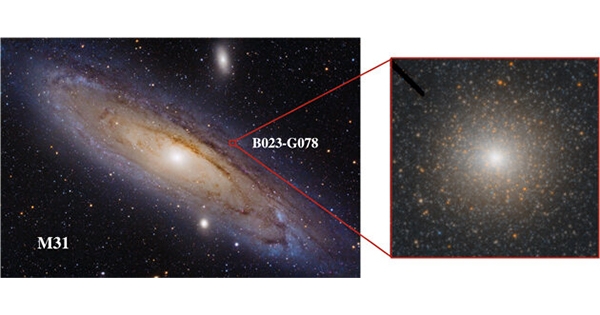 The Milky Way's closest galactic neighbor, the Andromeda Galaxy, also known as Messier 31 (M31), contains the massive star cluster designated B023-G078. It was long thought of as a globular star cluster, but researchers now suggest it is a stripped nucleus, the remains of an old galaxy. Stripped nuclei fell into larger galaxies which pulled their outer stars away, leaving the galactic nucleus with a black hole at its center to orbit the larger galaxy.

"Previously, we've found big black holes within massive, stripped nuclei that are much bigger than B023-G078. We knew that there must be smaller black holes in lower mass stripped nuclei, but there's never been direct evidence. I think this is a pretty clear case that we have finally found one of these objects," said lead author Renuka Pechetti of Liverpool John Moores University.

Black holes have been observed with masses up to a hundred times the size of our Sun, designated stellar-mass black holes. Supermassive black holes are also well documented, with masses millions of times greater than that of our Sun. However, there haven't been any measurements of black holes on a more intermediate scale, until now, with the B023-G078 estimated at around one hundred thousand solar masses.

"The stellar velocities we are getting gives us direct evidence that there's some kind of dark mass right at the center. It's very hard for globular clusters to form big black holes. But if it's in a stripped nucleus, then there must already be a black hole present, left as a remnant from the smaller galaxy that fell into the bigger one," said Pechetti.