All NewsBusiness, Financial & LegalCases, Cooling & PSUContests & GiveawaysCPU, APU & ChipsetsDealsDisplays & ProjectorsGamingMotherboardsScience, Space & RoboticsStorageVideo CardsVirtual & Augmented Reality
All ReviewsAll ArticlesAudio, Sound & SpeakersCases, Cooling & PSUCPUs, Chipsets & SoCsComputer SystemsDisplays & ProjectorsGamingMotherboardsNetworkingPeripheralsRAMStorageVideo Cards
GuidesGamingAsk the ExpertsNewsletterAboutForums
RTX 3090 TiRTX 4090Diablo 2GTA 6Halo InfiniteElon MuskRTX 3080HDMI 2.1
Video Cards
We haven't heard from these guys in a fair while but they seem to stay alive and continue to dish up some interesting alternatives in the graphics card market to what we're used to seeing from the likes of NVIDIA and AMD/ATI.

Today Matrox pave the way for a new series of fanless graphics cards, these called the "Millennium P690" series. Making up the lineup is a range of cards with different form factor sizes, each with low enough power consumption that passive cooling is made a breeze.

Another interesting feature about these cards is the ability for them to be quad-upgradeable meaning they can support up to four analog displays with the right configuration. Pair two P690 Plus cards together and you have the ability to output to four DVI or eight analog monitors.

For the full rundown on the new series, check out the official announcement residing on Matrix's website folks. 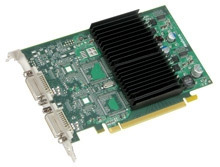