All NewsBusiness, Financial & LegalCases, Cooling & PSUContests & GiveawaysCPU, APU & ChipsetsDealsDisplays & ProjectorsGamingMotherboardsScience, Space & RoboticsStorageVideo CardsVirtual & Augmented Reality
All ReviewsAll ArticlesAudio, Sound & SpeakersCases, Cooling & PSUCPUs, Chipsets & SoCsComputer SystemsDisplays & ProjectorsGamingMotherboardsNetworkingPeripheralsRAMStorageVideo Cards
GuidesGamingAsk the ExpertsNewsletterAboutForums
RTX 3090 TiRTX 4090Diablo 2GTA 6Halo InfiniteElon MuskRTX 3080HDMI 2.1
Asus isn't the only motherboard manufacturer out there with a more affordable X38 in its line-up as we just found out that Gigabyte has produced a cheaper version as well, the GA-X38-DS5. It's actually quite similar to the GA-X38-DQ6, at least in as much as both of the boards feature DDR2 memory in favour of DDR3 and just by looking at the specifications, you couldn't tell the two apart.

The only real difference that we can notice is a missing Ethernet port, which isn't a big deal for most. There's no mention of the copper heatpipe in the unique features sections for the GA-X38-DS5. The boards even seem to come with the same accessories, so we can't quite figure this one out, as this can't save Gigabyte a lot of money and this is usually why there's a cut-down version of a better board. 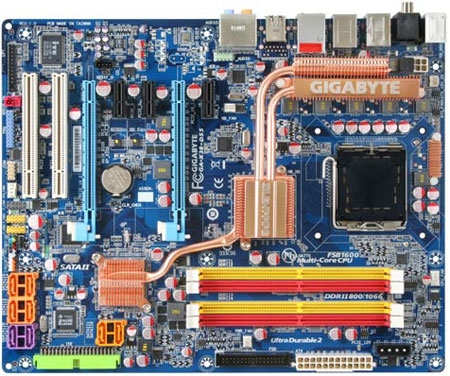 Either which way, this is what the board will look like and if you're happy with a single LAN connector and want to save some cash, then this might be the X38 board of your choice. You can find the product page here

On a side note, Asus has updated its X38 product page again and the Maximus Formula has appeared. You can find the board specifications here
Newsletter Subscription