After years of waiting due to technical and funding issues, NASA's James Webb Space Telescope is scheduled for launch on December 18th, 2021, aboard Ariane flight VA256. 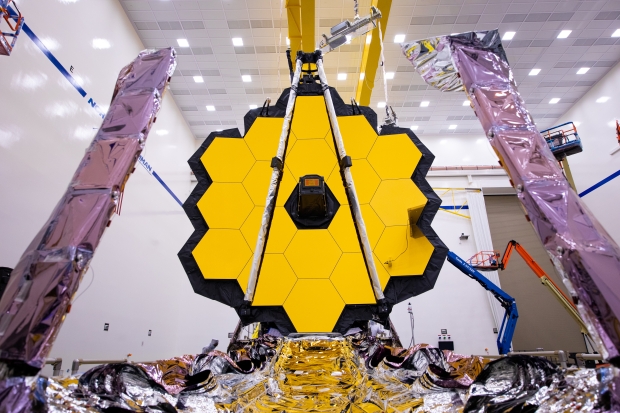 "We're going to look at everything there is in the universe that we can see. We want to know, how did we get here? The Big Bang, How does that work? We'll look, yes, and we have predictions. But we don't honestly know [how]" said John Mather, senior project scientist for the telescope, at a press conference on November 18th.

Set to survey worlds in our solar system and the greater universe, the James Webb Space Telescope will succeed NASA's esteemed Hubble Space Telescope. It is destined for the Lagrange point, a gravitationally stable area roughly a million miles (1.6 million kilometers) from Earth. After a month-long journey to arrive, the observatory will require another six months before it becomes fully operational. Onboard systems must find all instruments in working order, especially the giant folded mirror that must unfold and arrange itself.

"At six and a half meters (21 feet), the primary mirror was too big to fit in a rocket, so we designed it so that would it would unfold in space. It doesn't fold like a drop leaf table, so we needed mirrors that had to be in segments," said Lee Feinberg, the optical telescope element manager for Webb at NASA's Goddard Space Flight Center in Maryland, during the same press conference.

All eighteen mirror segments will unfold into a final design that must align with precision within one five-thousandth the diameter of a human hair, which algorithms running on the observatory's systems must manage, expected to consume several months as the process is carefully undertaken.

Compared to the Hubble Space Telescope, Webb's images will be captured at a hundred times the resolution and cover a more extensive portion of the infrared spectrum. No initial targets have been determined for observation, but the possibilities are endless. Where Hubble was able to see objects far enough away that appear as they did 400 million years following the Big Bang, Webb will be able to see the universe as it was only 100 million years after the Big Bang.

With the unprecedented discoveries that Hubble managed at the time, the future is looking bright for Webb.