All NewsBusiness, Financial & LegalCases, Cooling & PSUContests & GiveawaysCPU, APU & ChipsetsDealsDisplays & ProjectorsGamingMotherboardsScience, Space & RoboticsStorageVideo CardsVirtual & Augmented Reality
All ReviewsAll ArticlesAudio, Sound & SpeakersCases, Cooling & PSUCPUs, Chipsets & SoCsComputer SystemsDisplays & ProjectorsGamingMotherboardsNetworkingPeripheralsRAMStorageVideo Cards
GuidesGamingAsk the ExpertsNewsletterAboutForums
RTX 3090 TiRTX 4090Diablo 2GTA 6Halo InfiniteElon MuskRTX 3080HDMI 2.1
Some images of Nvidia's upcoming 780i board have made their way online and Chinese language site Expreview has the goods. According to the site, the board uses the 680i chipset as well as the BR04 chip which is also known as N200. You can take a look at the board below and we're sure you'll agree with us when we say it looks similar to the 680i boards. 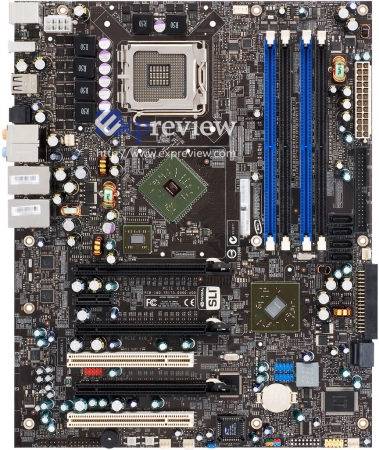 It's by no means identical and the N200 allows it to have three full x16 slots according to the source. The N200 also adds PCI Express 2.0, something the 680i board's lack. This isn't the first time Nvidia has added a chip to an already existing chipset, as it was done in the transition from dual x8 to dual x16 slots. There's no DDR3 support, for that you have to wait for the next chipset from Nvidia.

It seems like Nvidia has gone with the "if it ain't broke, don't fix it" approach this time around to have a product to compete with the X38 chipset until they're ready to release their DDR3 chipset. The only real difference seems to be a missing x1 PCI Express slot, most things seems to be in the same position on the board otherwise, odd but true.

You can check out some more info here in Chinese.
Newsletter Subscription