The scenario proposed sounds impossible, but it's actually quite real. NASA's Chandra X-ray Observatory has the images to prove it. 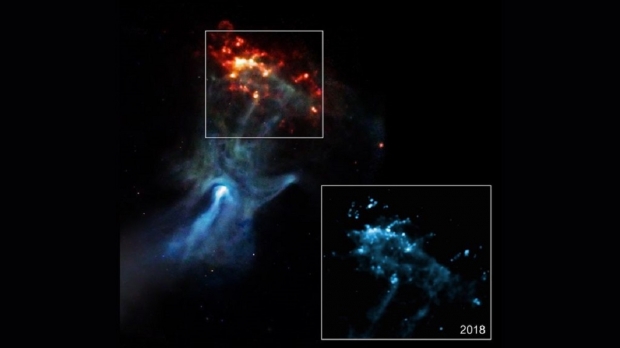 So, what are we exactly looking at here? The above image clearly shows a "hand", but it's not a galactic being of any kind, it's the remnants of a massive star dying in a supernova explosion. What appears in the image in the shape of a hand is what is known as a pulsar, an extremely dense corpse of what was once a large star.

The pulsar in the image named MSH 15-52 has many energetic particles surrounding it, and those energetic particles combined with the debris left over from the explosion have created the glorious image of a hand reaching for something. That "something" is an enormous gas cloud called RCW 89. The ghostly "hand" is located 17,000 light-years away from Earth, and according to astronomers, the light emitted from the supernova explosion would have reached Earth around 1,700 years ago, making MSH 15-52 one of the youngest supernova explosions we have found in the Milky Way galaxy.