Corsair have always had a tendancy to be one of the first when it came to revolutionising an already saturated market of varying types of USB flash drives.

As further backing to that, they have just introduced an entirely new family of flash drives with a "padlock" feature embedded. What this does is allow users a simple way of protecting their data from being accessible to just anyone, this by means of using a series of buttons on the outer-shell. A 4-digit PIN is required to be entered prior to being given access to the contents on the flash chip.

This feature is entirely independant of any system software manipulation. The drives will be available in both 1 and 2GB capacities, and are set to be released towards the end of this quarter.

For further information on them, head over to TechConnect. 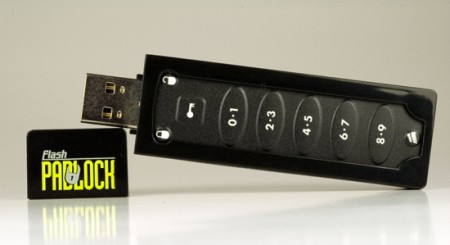 After years and year of impressing us with highly-overclockable memory modules, Corsair has managed to take the flash drive market by storm too with its Flash Voyager line-up. Now, after establishing a few speed records with the Flash Voyager GT and shattering dreams of fragility with the ultra-durable Flash Survivors, Corsair has turned towards a new of flash drive users, security.

Whilst we have the spotlight on Corsair, TechConnect have also acertained that due to the sub-par success rate of Corsair's most recent watercooling kit (the Nautilus 500), they've chosen to put future cooling projects on the backburner. They have put their focus entirely back onto memory products and power supplies. Whether or not they will choose to have another go at the watercooling market down the track is anyone's guess at this stage.