GodView Tech is currently running a Kickstarter campaign to fund the production of its GodView 5K AR/MR smart glasses, which are compatible with any device that supports HDMI or video of USB Type-C. 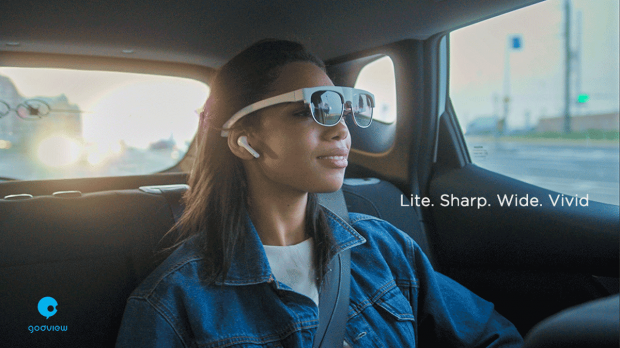 GodView Tech launched its Kickstarter campaign on October 28, and within 30 minutes, the company had pulled in the $5000 it needed to complete the project. The campaign has since gone on to raise more than $160,000, so it's fair to say people are excited about the GodView smart glasses. Given the specifications, it's not hard to see why.

GodView also offers a 110-degree field of view, nearly three times what you get in the HoloLens and Magic Leap headsets. GodView says that its smart glasses can produce a virtual screen equivalent to a 300" projecting screen, with up to 2000 nits of brightness.

The GodView smart glasses do not include a computing device. Instead, the headset is compatible with a wide variety of devices. You can power the smart glasses with a smartphone over a USB-C cable or through a wireless signal with software called GodView Bridge. GodView Tech also offers something called the PickMini, which is a small computing device that you can tether to the headset. GodView Tech is offering to models of the PickMini: one with an Intel quad-core processor running Windows 10, and one with a Qualcomm Snapdragon XR2 processor running Android.

There's still time to get in on the GodView Kickstarter campaign, and if you act fast, you can even score one of the $199 super-early bird packages, which are supposed to ship before the end of the year. The campaign is scheduled to wrap up on November 26.