Ark: Survival Evolved is one of the few "wow" moments on the Xbox Series X, and the next-gen optimizations are a radical transformation from the base game.

Ark just got a major overhaul patch in preparation for the Xbox Series X, and in short, this is the way the game was meant to be played. The game shines on the Series X with massively improved shadows, lighting effects, draw distances--you name it and it simply looks better on the next-gen Xbox.

Gamers can now hit up to 4K 60FPS in-game, complete with significant overhauls in shadowing, HDR, post-processing effects, and tons of different settings that run on the Epic preset. Loading has also been boosted by 7-fold thanks to the Series X's high-speed 2.4GB/sec PCIe 4.0 SSD and DirectX 12-accelerated APIs.

Granted the side-by-side comparisons show Ark running on a base 2013 Xbox One at 720p, which probably isn't a resolution that most gamers play at. The outdated launch Xbox One is significantly weaker than the Series X's monstrous 12TFLOP GPU with its RDNA 2.0 architecture so it's admittedly not the best comparison.

Still, though, the performance is pretty eye-catching.

The new patch for Ark: Survival Evolved is out now. Here's a list of the improved effects and visuals found in the update: 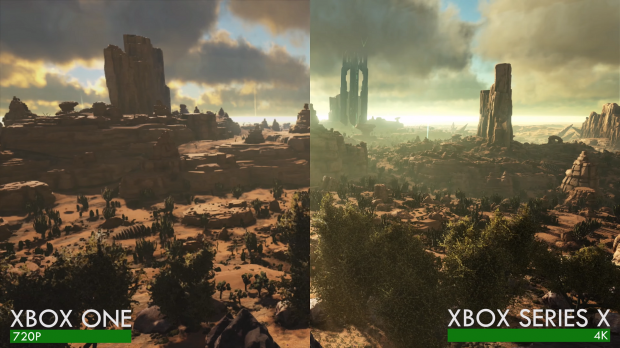