As expected, Respawn Entertainment revealed the next character that will be coming to Apex Legends, introducing Loba, the thief that's hellbent on revenge.

The new character was revealed in the Season 5 trailer titled "Fortune's Favor", where we are introduced to Loba invading what seems to be a secret underground base beneath Kings Canyon. In this base are what seems to be backups for Revenants body in the event of it being destroyed; there's also the original mind that Revenant uses to copy every time he makes another edition of himself.

Loba is unable to destroy the original mind, and instead triggered the facilities' defensive system, barely making it out alive. Throughout her escape, we can see that Loba uses her teleport to get out of several close call scenarios, I'd imagine this will also be her ability in-game. When Loba makes it out of the facility, she meets the rest of the Apex Legends, and her dreaded nemesis, Revenant. Revenant asks her, "come to kill me little girl?" 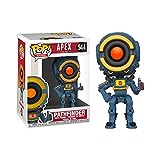