Now that the Doom series has made a huge comeback, we thought it prudent to take a look at what could've happened with the series. We're glad this Doom 4 project got cancelled. The series might've died out if this game got released.

From 2007 to 2013, id Software was working on Doom 4. But it wasn't the kind of Doom we got in 2016, nor is it the explosive bullets-and-guts thrillride that is Doom Eternal. The cancelled Doom 4 project was a very different type of game; instead of radical monstrosities amid fiery hellscapes and over-the-top chaos, Doom 4 was mostly based around post-apocalyptic survival with a lot of human interactions. It basically reminds me of Metro with demons.

The combat looks good--Doomguy has an awesome kick and even smashes some demon brains with his boots--and the FPS action is a bit slow, but this is a pre-rendered prototype. The death animations are pretty gnarly too. The actual rendered cinematics are pretty damn good, though. They just seem more like RAGE than Doom. The game takes place on earth during a demon infestation, and there's clans of armed humans in cluttered villages and cities straight out of a high-tech Mad Max. The game also has the spirit of Terminator's resistance fighters going up against impossible odds.

There's notable NPCs like an eyepatch-wearing Liam Neeson look alike and a merchant who looks like the Wise Old Man of the game.

It could've been an interesting game, but there was just one problem: It wasn't Doom. 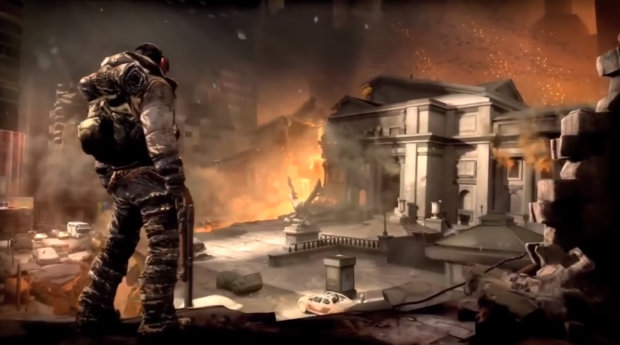