Fortnite has been a billboard for other franchises and games for a while now, with tons of crossovers like Batman, The Avengers, John Wick, and even hosting a concert in-game. Now it's getting an exclusive scene from Episode IX. 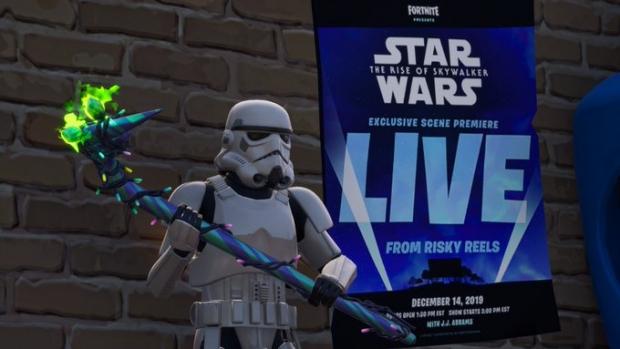 On December 14, Fortnite gamers can watch an exclusive scene from Star Wars Episode IX: Rise of Skywalker at the in-game Risky Reels drive-in (it's next to Frenzy Farm in the north-east section of the map). J.J. Abrams will be in attendance at the event and could do a Q&A session of sorts and discuss the film.

This is a pretty big deal for Epic Games and the battle royale sensation. Fortnite is no stranger to blatantly advertising other games franchises, movies, and pop culture, but this marks the first time the game is being used as a kind of preview screen for films. The idea is simple: Lucasfilm and Disney want to capture Fortnite's hundreds-million strong audience and remind everyone to go see the new Star Wars movie.

Fortnite is effectively being treated like a digital Super Bowl commercial spree.

We could see more movie studios jump on board and use Fortnite as a preview screen, too. Up until now it's just been characters and transmedia cross-overs, nothing major like actual exclusive preview scenes from hot upcoming films.