The new ASUS ProArt StudioBook Pro X W730 arrives with a large 17.3-inch OLED display with a native 1920 x 1200 resolution, in what ASUS calls a NanoEdge display -- for those slim bezels. The display itself covers 97% of the DCI-P3 color gamut, is Pantone Validated, and factory-calibrated to a Delta E<1.5 accuracy -- something not often seen on laptops.

It wouldn't be a workstation-class notebook with all that hardware and no I/O, with ASUS offering up a plethora of connectivity in:

ASUS packs all of this horsepower and connectivity into a laptop that weighs just 2.5 kg or 5.51 lbs, and includes a 95Wh 6-cell battery that should provide some great battery life numbers on the ProArt StudioBook Pro X W730.

As for the cost, the ASUS ProArt StudioBook Pro X W730 will be priced at $4999 and is available now from ASUS and its retail partners. 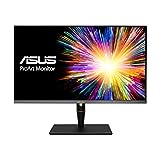