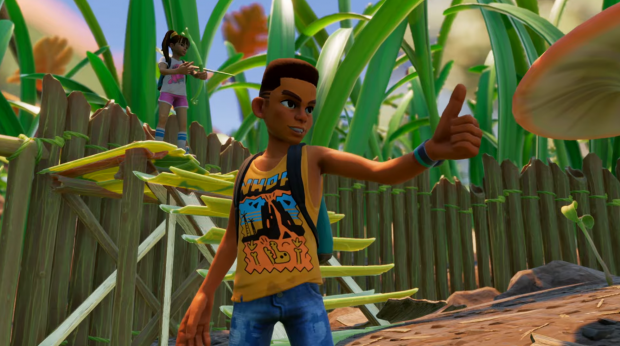 Today at XO19 in London, England, Obsidian revealed a brand new IP. It's called Grounded, and it's basically a wacky mashup with platforming aspects, exploration mechanics, and first-person survival elements. There's even some Minecraft thrown in there too.

You play as a kid who's been shrunk down to the size of an ant who's trapped in a backyard, and to survive you have to team up with friends to hunt insects like ferocious ants, build communities, and scavenge the land--all while crafting your own settlements and weapons. It's kind of like the Sea of Thieves set in the Honey I Shrunk the Kids universe.

Obsidian says Grounded has been in dev long before Microsoft bought the studio. It's more of a passion project for Obsidian. But this is exactly the type of game Microsoft wants right now. The company absolutely loves anything with multiplayer, replayability, and projects with massive accessibility. Grounded hits all of these notes quite well.

"Grounded has actually been in development for little over a year, it's a small team headed up by Adam Brenneke. The whole team is really into survival so we just wanted to see what we could bring to the genre. It's something that was in production before we became part of Microsoft, but once Microsoft saw it they really wanted to move it forward," said Obsidian design director Josh Sawyer.

"We've been tossing around the idea of making a survival game for quite a while now, and it wasn't until Deadfire started to wind down that we started having brainstorming sessions where this unique idea of where...what if we made a survival game where players are shrunk down to the size of an ant came up," said Obsidian senior programmer Roby Atadero.

"Adam was excited about the project and ran over to Feargus, and we put together a small production team and started to just flex our creative muscles. And within a month we knew we had something special so we've just been running with it."

Ground is releasing Spring 2020 and will launch on Xbox Game Pass, but is launching first in the Xbox Insider Program.

Here's more info from a press release from Microsoft:

In Grounded, players are shrunken to the size of an ant and tasked with surviving in the unique micro-world of a suburban backyard. Players must gather, craft and build bases with everyday objects found within the yard, searching for life-saving resources and living alongside giant, peaceful insects while fighting to survive massive hostile inhabitants.

Grounded provides a mix of environmental and narrative driven story telling. Set in a versatile, handcrafted sandbox structure it allows players to create their own experience from the ground up. Tasks that may seem approachable when human-sized become a challenge in this dangerous backyard landscape. This familiar yet fantastical world can be navigated solo or in four-person co-operative multiplayer, where players work together to complete missions or explore the intricately detailed world.

Created by a small development team, one of many working on new projects in the studio, Grounded is a true passion project. This title has given the team the creative outlet to bring their years of developing highly regarded games to bear on the survival genre. RPGs like The Outer Worlds will always be in Obsidian's DNA, but from time to time we want to stretch our creative muscles and try things that might be a little different

Microsoft has been a fantastic partner for Grounded which was in development long before the acquisition last year. We're fortunate to be given the freedom to continue flexing our creative muscles and develop the games we want to make.

Curious for more Grounded details? Check out the all-new trailer and stay tuned to Xbox Wire for the next update coming soon!