Warner Bros has dropped a new teaser trailer for their upcoming animated Scooby-Doo movie called Scoob! The trailer shows off that the iconic duo is bound for a space adventure.

From the trailer, we can see that the movie takes place all the way back when Shaggy and Scooby were just a kid and a puppy. It also touches on how Shaggy and Scooby first met, and of course, the catalyst for their everlasting friendship was one of their iconic sandwiches. During their first meeting, we also find out how Scooby gets his name and how the rest of Mystery Incorporated gets brought into the picture.

So who will be voicing each of the Mystery gang? Frank Welker will be voicing Scooby-Doo, Shaggy will be voiced by Will Forte, Fred will be voiced by Zac Efron, Daphne by Amanda Seyfried, and Velma by Gina Rodriguez. Alongside those voice actors, stars such as Mark Wahlberg, Ken Jeong, and Tracy Morgan will also be present in the film. Scoob! is expected to hit theatres on May 15th, 2020. 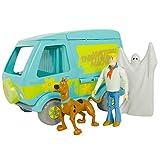