As we get closer to the official launch of NVIDIA's new GeForce RTX 2060 SUPER and GeForce RTX 2070 SUPER graphics cards, we're finding out more and more from AIB partners like ASUS and GIGABYTE. 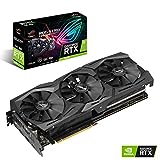