Disney and Marvel have just dropped a new trailer to Avengers: Endgame, which has some spoilers in it so if you want to go into it fresh, please do not watch the trailer. If you want to be spoiled, at least a little, then you know what to do.

We get to see a bunch of new shots, characters, interaction between characters that have never met in the MCU (or ever), and more. The new Endgame trailer has a cool moment between Thor and Captain Marvel at the end, the latter of which stars in her own movie that is currently in theaters.

The trailer shows the Avengers in some 'Advanced Suits' that were teased in some toy packaging leaks last year, which could turn out to be Quantum Suits that would allow the heroes to enter the Quantum Realm. The Quantum Realm is where Ant-Man spent considerable time exploring, and even more so in its recent sequel Ant-Man and The Wasp.

We could see the Quantum Suits being used to travel through time, reversing the effects of Thanos' actions in Avengers: Infinity War. Thanos is still a major threat in Endgame, especially considering he wiped away half of the population of Earth in a single snap of his fingers. 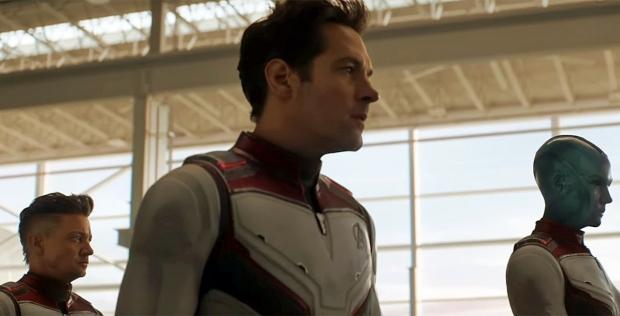 In the sequence with the Advanced Tech suits you'll notice that Tony Stark is back with us, meaning he makes it back to Earth, but Thor and Captain Marvel are missing. We might see the interaction between Thor and Captain Marvel start there as we see in the trailer, with a large discussion on how to defeat Thanos and reverse his population-killing-finger-snap from Infinity War. I'm sure right after that the Avengers, or at least what's left of them, don the new suits and travel back in time.

I would've loved to have seen some action, but the near 3-hour long full movie will most likely have some of the best action we've seen in the MCU yet as the Russo Brothers are back in the directors chair once again. They are the ones that directed one of my favorite MCU movies in Captain America: The Winter Soldier, as well as Avengers: Infinity War.

Avengers: Endgame is going to be a big deal when it drops on April 26.