Ubisoft has announced yet another free-to-play weekend for their strategic shooter Rainbow Six Siege. Players across all platforms will be able to join in on the action on November 15th.

Ubisoft has decided to make their shooter free-to-play for a weekend once again, the last month we saw Rainbow Six Siege go to free-to-play was on August 16th, with that weekend we also saw a 60% discount and it is the very same for this one. The developer has taken to their blog to post reminders about the benefits of participating in the free weekend. The post covers the basic, pre-loading of the game, playing with friends over the weekend, current purchasing options, progress and content availability.

In the entire post you will an image for each of the regions and the times the free weekend begins. The free weekend will be across all platforms; PlayStation 4, PC and Xbox One. For more information, please visit the official Ubisoft website here. 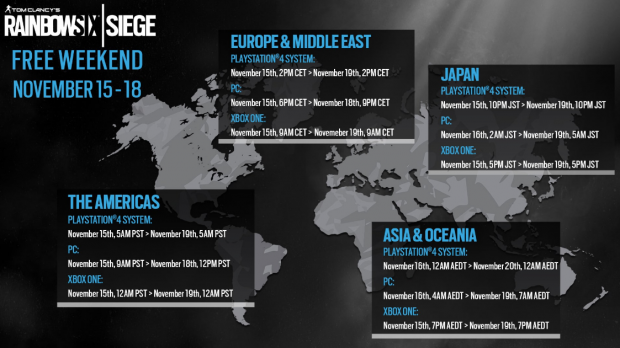