Ubisoft have announced their coming content update for Assassin's Creed Odyssey, the update will be feature a bunch of content from new quests, new game features, balancing updates a raised level cap and even new mythical beasts to slay.

The November content update planned for Assassin's Creed Odyssey will be adding a bunch of new features for gamers. Starting off, we have beginning of the 'Lost Tales of Greece' questlines, the first quest is titled 'The Show Must Go On' and will take players back to the Battle of 300 in the form of an actor playing King Leonidas. The second quest is called 'Divine Intervention', players will encounter a mysterious women who will "test your qualities through several divine trials!"

The content update will also be adding 'Epic Events', in these events players will have to hunt down Epic Mercenaries or Epic Ships. Players that complete these tasks will be rewarded with either Orichalcum, new ship designs, gear or more. Ubisoft have also thrown a new boss into the mix within this content update, introducing Steropes the Cyclopes. Steropes will be found through a new quest titled 'The Lightening Bringer', players will have to defeat Steropes and upon completion will receive a legendary bow. 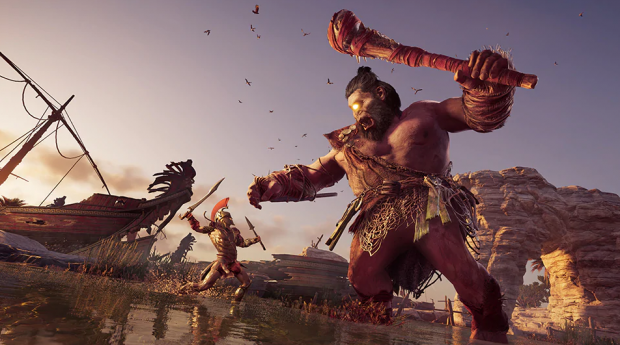 Other features that will be added in this November content update are; Level cap raised from 50 to 70, transmogication of armor (using the stats of one piece of armor but making it look like another), lowered upgrade cost for gear and more. For more information, visit the official Ubisoft patch notes here.

Added support for the second Lost Tale of Greece - A Divine Intervention.

The quest "Test of Judgment" will be available in-game upon installing version 1.0.7.

Located in Korinth, the quest will be added to the quest log once the quest giver was found.

Addressed various issues that prevented the following quests from completing: