I pumped in some serious hours into Quake III Arena when it first launched, so I hereby challenge the DeepMind AI to a game of Quake III and I know I'll destroy it.

As for the story itself, the OpenAI bots were playing Dota 2 last week and moved into the FPS world with Quake III where their training agents were able to beat humans in a game of capture the flag in Quake III Arena. The training agents had to run through the 3D environment of Quake III which isn't the easiest for code to do, but DeepMind's researchers train the AI through reinforcement learning: training by trial and error, in a larger scale.

The AI bots aren't provided instructions on how to play the game in question, so it's serious trial and error on how to win. It takes up to 500,000 games lasting 5 minutes each to train the DeepMind AI bots, and they don't just learn the basic rules of CTF, they'll also define strategies like guarding their flag, camping enemies' bases, and following teammates so that you can attack the enemy in larger numbers.

AI has more brainpower than us, so the researchers didn't make it easy: each game was played on a totally new, procedurally generated map so that the researchers knew the AI bots weren't learning strategies that were only good to use on a single map. Better yet, the AI bots didn't have access to the raw data feeds from the game like distance between opponents or health bars, they had to learn on-the-fly by visual input on the screen, just like us mere mortals have to.

All this makes me want to do is battle an AI bot in Quake III Arena, like really bad. I'll start preparing my rocket launcher now so I can see if the AI bots will learn how to rocket jump as well as I can. HA! 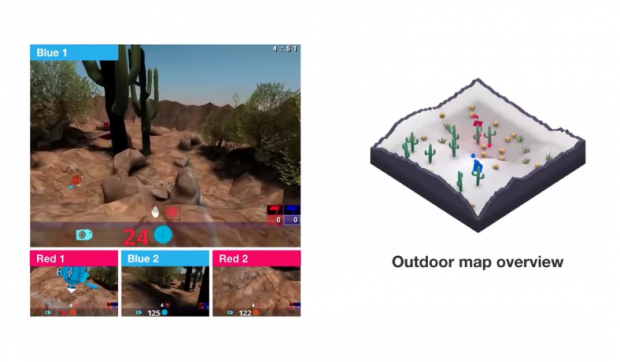