CES 2018 - At CES 2018, we spotted an Intel Optane drive discretely placed in the M.2 slot of an ASUS motherboard. While neither Intel nor ASUS was willing to discuss specifications with us, we were allowed to take a snap of the drive, hinting that release is imminent. 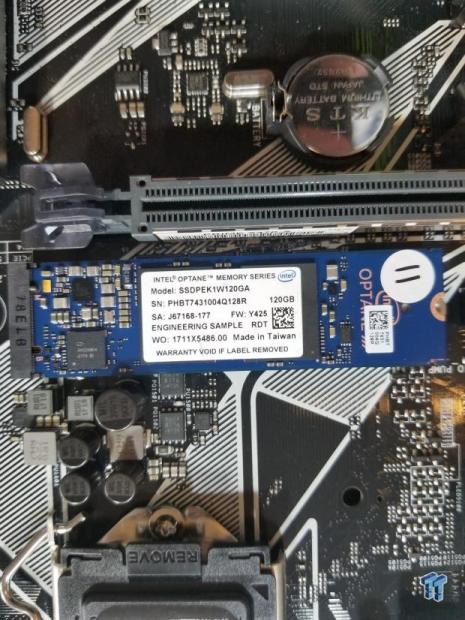 When Intel initially released their Optane SSDs, they were meant to be used as system accelerators working with hard drives and predictive software to enhance user experience at an introductory level. Intel wanted to give consumers the option to use Optane+HDD rather than a full-blown SSD. However, many people wanted Optane as a system drive.

The SSD is perfect for small file workloads, but with only 16GB and 32GB variants launched, most people were not able to use them as standalone drives. While you can currently find Intel's 900p series Optane drives in larger sizes, they only exist in the U.2 or add-in-card (AIC) form factors and are very expensive.

The new 800p series will come in 64GB and 120GB M.2 variants, which is a fourfold increase over their predecessors. With a 120GB drive it would be possible to put your OS on a full blown Optane drive, and the rest of your applications on a typical SSD or HDD. We Googled the product marking "ssdpek1w120GA" and discovered that some sites have pre-listed the drive for sale, so hopefully it will release soon!