KGI Securities analyst Ming-Chi Kuo has said that that iPhones that will be released in 2018 that will feature upgraded liquid crystal polymer (LCP) antenna modules which would contribute to an overall improvement in LTE transmission speeds. 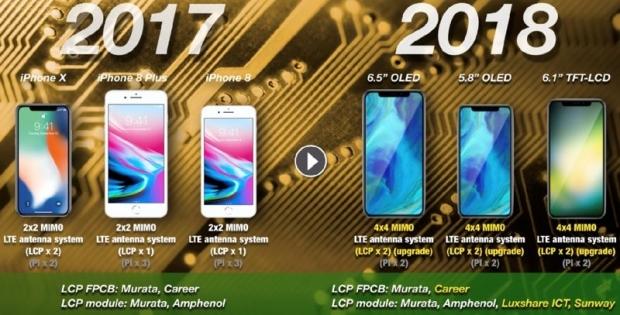 Kuo continues by saying that the iPhone models will be using two LCP LTE antenna modules which would make them very similar to the iPhone X, but instead will feature support improvements for 4x4 MIMO standards.

Kuo spoke of this in a recent note that was sent out to Apple investors: "Antenna design upgrade a key factor in anticipated boost to LTE transmission speed in new 2H18F iPhone models. As a LTE antenna FPCB material, LCP is superior to PI in properties related to high-frequency, thermal performance and moisture resistance. We predict 2H18 new iPhones will be equipped with two LCP LTE antenna modules same as iPhone X or more, but with higher specs to support 4x4 MIMO standards."

Intel' news XMM 7560 and Qualcomm Snapdragon X20 modems are expected to be used by Apple in their next-generation iOS device, both of these chips have support for 4x4 MIMO, adding another two data paths to the already existing two can create the potential for a very significant increase in speed from the device to the cellular tower.

Kuo has said in other notes that Apple is working on three new iPhones for 2018, a model featuring an OLED display, a LCD model at a lower price point and also an iPhone X Plus like modele. According to Kuo, Apple is estimated to be ship between 100-200 million iPhones in the second half of 2018.