During the last nearly 16 years, the International Space Station has been a home for many astronauts and cosmonauts. Currently, there are six people aboard the ISS and, like many before them, spend around nine and a half hours a day doing different research. If we exclude the time they spend sleeping, members of the crew have around four hours a day of free time during which they eat, but also entertain themselves. 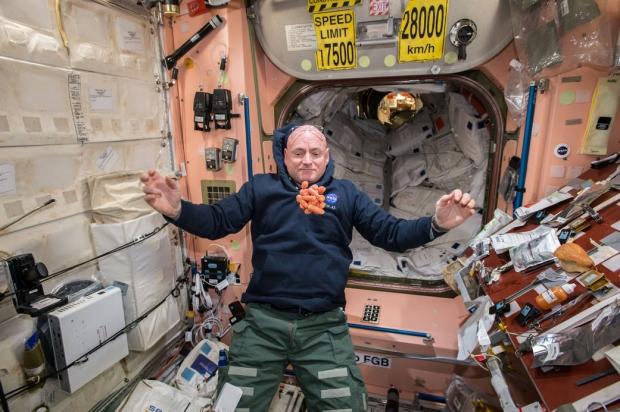 To maximize the use of their free time, many find interesting ways of entertainment.

One of the most interesting things you can do aboard the Space Station is to "fly". In space there are no terms 'up' and 'down', there is no floor or ceiling.

Believe it or not, the astronauts describe the food at the ISS as very delicious. Of course, it does help that they have a big role in choosing the food that will be delivered. During the time in space, the taste sense of the astronauts weakens due to the way in which body fluids circulate in weightlessness. Towards the end of their missions, many agree that they enjoy spicy food due to this phenomenon.

Some, of course, decide to have fun while eating. Here you can see the astronaut Chris Cassidy enjoying a 'flying' bite.

Fluids behave differently in space. The astronauts can't simply pour a cup of coffee. They have to fill up a special bag with a liquid and then use a specially designed straw to drink so their coffee doesn't float away.

Here you can see the famous astronaut Scott Kelly drinking coffee. It may look a little unusual, but that's the way it is in space.

The ISS crews have the time to enjoy movies or play games. Some of them spend their time reading books or taking photos of our planet. And sometimes they play games that are possible only in zero gravity.

Astronaut Alexander Gerst decided to play soccer with his colleagues.

The preparations for a spacewalk may take eight to twelve hours. The astronauts who go for a walk in space need to be focused on their tasks and they have a tight schedule to keep. But, if they're lucky, they may catch a moment or two in which they can enjoy the view of the Earth from around 400 kilometers. Many astronauts describe this view as the most beautiful thing they had ever seen in their lives.

Terry Virsta and Barry "Butch" Wilmore shared part of their experience with us.