Last night I shot a few rounds of pool with Falcon Northwest president Kelt Reeves. We talked some shop, wore silly hats, chucked wooden chairs across the bar, heckled the other patrons, and tried to jump the cue ball over beer bottles. We weren't physically in the same space, mind you, but rather inside virtual reality playing Pool Nation VR on the HTC Vive. But it sure as hell felt lifelike, and was in fact one of the most immersive VR experiences I've had to date...and I've had at least 50 of them.

Pool Nation VR is simple, as most Vive games currently are. Grab a cue stick, select some rules, play solo, or invite a friend to your billiards table. The developers have done a fantastic job creating an atmospheric setting, from believable lighting to a jukebox blasting blues, to a slew of props like giant dominos, haphazardly placed beer bottles, and of course books with titles like "Kitten Juggling."

The only criticism I have is that everyone else in the bar is huddled in groups, just swaying and staring at the floor. I suspect this is because the framerate would take a hit if multiple games were happening simultaneously within your field of vision.

And the physics, god. The balls react precisely as you'd expect them too, and the feeling of pulling back the cue stick and hammering one into the corner pocket, or making a perfectly aimed bank shot, just feels awesome. 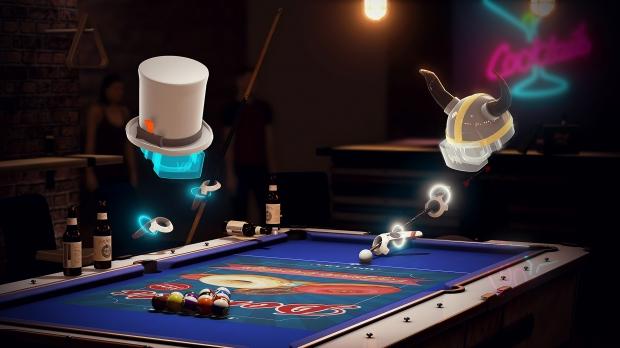 But beyond all of that, Pool Nation VR nails the sense of presence when it comes to multiplayer sessions. During our time playing, we would instinctively move out of each others' way. I even noticed that when his avatar was next to me, I'd lower my voice, despite said avatar only being a pair of controllers and a see-through VR helmet. It's astounding how much our brain fills in the blanks.

We both agreed that our time hanging out with each other in Pool Nation VR was borderline historic. He remarked that it was an experience he'd remember forever since it was his first time playing VR multiplayer. And my reason was simple: It just felt like playing pool with a friend.

Pool Nation VR is one of many VR titles on sale during Steam's annual wallet-busting Summer Sale.