GDC 2016 - I've been itching to play Budget Cuts ever since I saw some videos on YouTube of it, so I made sure to find out where it was being displayed at the Game Developers Conference, so I popped into the Unity booth and tried it out.

Budget Cuts has a specific corporate art style that made me feel like I was walking around in something familiar, but in a virtual world, it felt unique. Navigating in the virtual Budget Cuts world was the most innovative yet, where you use the left Lighthouse controller with the HTC Vive to throw out a portal - and then a window of that portal pops up above your left controller, letting you peek into the portal to see what's around the corner.

It was one of the best ways of mavigating the world in a VR game yet, as you could pop a portal next to a grill on the wall - pull the grill away, and peek through the grill. Looking around corners and into windows was something truly awesome in Budget Cuts because it made me feel like I was right there in the world - creating an amazing sense of presence.

The left Lighthouse controller is also used to house your inventory, where you use the right controller to pick thing up in the game world. You can pick up random objects like cups or books, but the fun begins when you pick up freakin' throwing knives. Yeah, knives.

Once you've got some knives in your hands, you can walk around the world looking for robots in Trans Corporation - the virual corporation in Budget Cuts. These robots are walking around the office, so you have to make sure you're not seen or else they'll take you down. To take them down, you need to use everything at your disposal - knives, cups, or even other robots.

I created a few portals easily, getting around the level and then I saw my first robot. I stretched around the corner to see it, and then made a portal on the other side of where the robot was - and a level above it. I then waited to see where his walking path was, and made a portal on the beam above him. I dropped a coffee cup in front of it, distracting it for a few seconds - so that I could create another portal behind it, pop down and throw a knife right into its back. I've never felt like such a ninja in a game - it was an awesome feeling.

I spent the rest of my time playing around in Budget Cuts doing similar actions, but with a limited demo time of 5 minutes, you have to be quick. I was attacked by robots, and killed - so I asked for another round. In the second round of Budget Cuts, I was much more confident in using the controllersr and navigating Trans Corporation, so I began playing much better.

In the second round, I found myself throwing a portal into an opening in the ceiling, but I couldn't see inside of it with the portal preview. I checked again, and because it was crawl space - I had to, you know, crawl - but in real life. So I got down close to the ground and then I could use the portal, which gave me another layer of presence and away I crawled.

Once I crawled through the ceiling space, I found another opening - so I thought I'd test out the tracking system on the HTC Vive and how well it performed on Budget Cuts. I put my face right down close to the ground (in real life), peeking through the hole in the ceiling (in Budget Cuts) - and wow, just wow - was it amazing.

Because I was leaning down in real life, looking through the hole in the ceiling felt much more real than I can convey through a written post on it. It was super awesome to be able to look down, through a hole in the ceiling, in a virual world. This is something that's completely impossible in any other way other than VR, and that's what makes VR special.

At the end of the day, Budget Cuts became one of my favorite VR games at GDC - and will be on my list of VR games to buy on day one. The developer of Budget Cuts, Neat Corporation, also has other parts of the game that we didn't play - such as finding keys to unlock safes, and solve various puzzles.

The small developer team is working on various features for Budget Cuts, and will be available later this year. 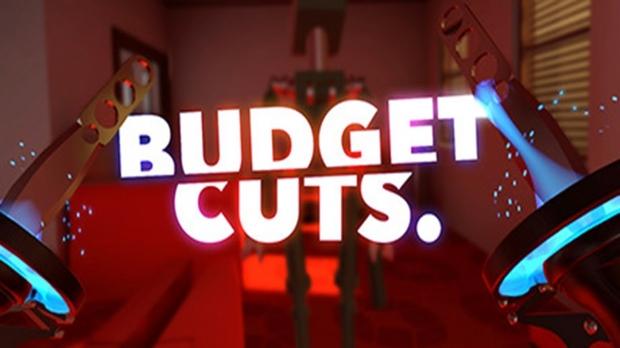